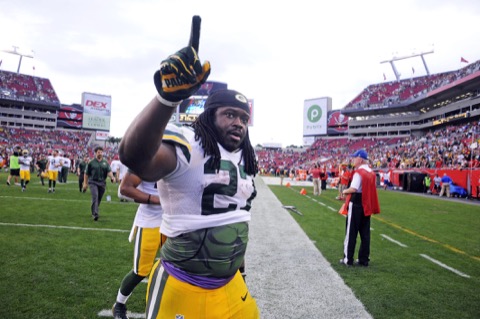 The Green Bay Packers 20-3 win over the two-win Tampa Bay Buccaneers sets up just what we anticipated all along — a game with the Detroit Lions that will decide the NFC North.

Before we get on to that, let’s get to five more thoughts from the Packers’ week 16 win. By the way, the Packers are early seven-point favorites against Detroit because, lest you forget, these are the Detroit fucking Lions we’re talking about.

Welcome back, Buffoon
Mike McCarthy had a pretty decent run there for a while. He strung together a couple games in a row where he managed not to employ his typical buffoonish tactics. Then there was last week in Buffalo, where he refused to ride Eddie Lacy, despite the fact that Lacy looked unstoppable and Aaron Rodgers looked like Barney Fife. He followed that up with the buffoonish play calling on the first and goal series this week. First, if Eddie Lacy didn’t break the plane on second down, he was awfully close. You at least challenge that play. Not Buffoon. Then, on third down, Buffoon decides, hey, let’s run this slow-developing run play and hand it to the slowest dude on the team, John Kuhn. Maybe Kuhn had a shot if we was going straight ahead. Instead, Kuhn was running left to right on the play and predictably got buried in the backfield. So what do you do on fourth down? Five wide, of course! You know, when you have the ball at the opponent’s 1-yard line, I don’t care if you go for it on fourth down and fail to convert, so long as you handed the ball to Eddie Lacy up the middle on each one of the four plays. Buffoon had to get cute though and Buffoon got what he deserved.

Is the MVP in doubt?
We tabbed Aaron Rodgers as the runaway winner of the MVP a few weeks back. J.J. Watt and DeMarco Murray were probably his closest competition. Watt will still get some consideration, but his team just isn’t good enough to make him a legitimate contender. As for Murray, great season, but there’s zero buzz surrounding the guy at this point. No, the guy who’s probably pushing Rodgers now is none other than Cowboys quarterback Tony Romo. You did not read that wrong. Rodgers has slowed down a bit. There was that turd in Buffalo and although he threw for over 300 yards this week, Rodgers only threw one touchdown. Meanwhile, Romo has been lights out lately. He has 32 touchdowns against 8 interceptions and he’s thrown 10 and zero in the past three games. If you look at the total body of work, Rodgers should still get the nod, but the race is probably closer now than at any point in the second half of the season. If the Packers lose in week 17 and Rodgers has a bad game, Romo could overtake him. Not that this should be anyone’s primary concern, but it will be interesting to watch.

Eeeeeeeeeeeeeeasy!
Hey, Eddie Lacy went over 1,000 yards on Sunday. Did you notice? This is Lacy’s second 1,000-yard season in two NFL seasons, which is a swell accomplishment. Lacy has 1,039 yards so far this year and has averaged an impressive 4.7 yards per carry. That’s an improvement over the 4.1 yards per carry he averaged last season. We don’t bring this up because it’s all that noteworthy. If you’re a featured back in the NFL and you DON’T go over 1,000 yards in a season, you’re not much of a featured back. We bring it up because, have you ever noticed a quieter 1,000-yard season by a running back? Obviously, Buffoon despises running the football, so that aspect of the game is total afterthought. Partially because of that, Lacy has had only two 100-yard games all season. Both came against Minnesota. He’s also only carried the ball more than 20 times twice all season. Despite the fact that no one noticed, it’s actually quite impressive that Lacy surpassed 1,000 yards in spite of Buffoon’s play calling.

Pad those stats, boys!
While it was very pleasing to watch the Packers defense maul an opponent for once, all we could think when they were piling up all of those sacks was, way to pad your stats, boys! Clay Matthews led the parade with 2.5 sacks, which gives him 10 for the season. That’s a nice number after he recorded only 7.5 sacks last year. Still, a quarter of his sack production came against one team — the worst team on the schedule. The same goes for Julius Peppers, who hasn’t sniffed a quarterback in weeks. Yet, there was Peppers ringing up two sacks of his own on Sunday. That gives him seven on the season, which is the same number he had last year in Chicago, but is the fewest he’s had since 2007.

Speaking of Clay Matthews
He seems to have settled in to the inside/outside linebacker role pretty nicely. We still feel like he’s better utilized inside, but the Packers obviously disagree because they have been using Matthews more extensively on the outside in recent weeks. They’ve forced more A.J. Hawk down our throats in the process, but that’s beside the point. Matthews’ production in the past three games looks like this — 15 tackles, 5.5 sacks, 1 pass defended. He appears to be in better positions to make plays than he was early in the season and he’s making them.