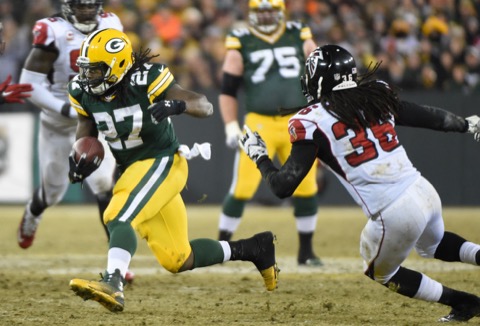 Green Bay Packers running back Eddie Lacy didn’t finish Monday night’s game with the Atlanta Falcons. We hardly noticed because James Starks was busy rushing for 75 yards of his own.

However, Lacy suffered a bruised hip during the game.

“I don’t have high concern based off the information talking with Doc McKenzie last night,” McCarthy said. “Coming off a Monday night game, tomorrow will be a lot like a Tuesday. We’ll see how these guys go through their examinations.”

Lacy has been the bell cow of late for the Packers, with 20-plus carries in each of the two games prior to Monday night. Against Atlanta, he only got 13, which is more in line with his average prior to week 12.

Easy Ed still managed more than 100 total yards with 73 rushing and 33 receiving. The Packers will need that kind of production in the playoffs.