by Andrew Chitko
in Uncategorized
7 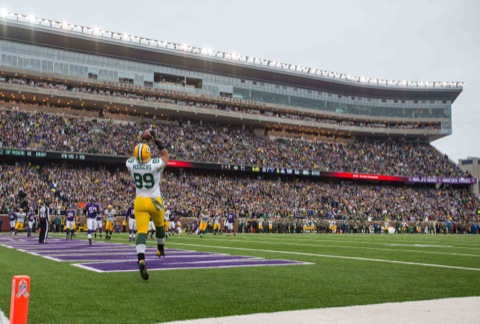 After the Green Bay Packers had taken care of their business and handed the Minnesota Vikings a hard-fought 24-21 defeat, the first thought that popped into my head was, “How am I going to come up with 10 things to talk about from this very nondescript game?”

It wasn’t pretty. It wasn’t terribly exciting. Yet when the dust had settled and the scoreboard showed all zeroes, the Packers had come away with another win versus a division foe and will carry plenty of momentum into Lambeau Field next weekend versus the New England Patriots.

So without further ado, here are the 10 things that stood out most in Sunday’s game versus the pukes from Minnesota.

1. Lacy laces ’em up, then laces ’em
Did you know Eddie Lacy was fighting an illness prior to, during, and after his beastly performance Sunday afternoon? It’s true. Lacy was so worn out from running over Vikings players that he bowed out of his post-game interviewing duties. Josh Sitton and T.J. Lang, both who were fighting through issues of their own, sung the praises of their running back.

“He’s one tough son of a bitch,” offered Sitton.

2. A Bridge over calm Waters
The Vikings appear to have found their quarterback of the future in Teddy Bridgewater. Oh sure, the rookie passer missed plenty of throws on Sunday and we can only hope this is a trend that continues for years to come, but Bridgewater also did some good things as well.

What stood out the most was Bridgewater’s command of the pocket and his exceptional awareness. Teddy kept his eyes downfield and moved up in the pocket on several occasions when it looked like Packers outside pass rushers would get home. His progressions were strong and he didn’t panic. Except for that heave that Micah Hyde was only too happy to intercept. He looked like a rookie on that one.

The Packers have been dominating the Vikings for quite a while now, but if Teddy Bridgewater is able to show steady improvement and advance his game off a nice rookie campaign, this division rivalry could be set to heat up in the very near future.

If Bridgewater completes some of those easier throws, are we lamenting a deflating loss rather than celebrating a win?

3. Saving it up
Although the big lead story in this game was the Packers dominant rushing attack led by Eddie Lacy, in actuality the Packers were trailing in rushing yardage most of the game and even after three quarters. Prior to the start of the fourth quarter, the Packers had 84 yards on the ground while the Vikings had 97.

Granted, the scoreboard dictated that the Vikings throw far more than run while just the opposite for the Packers. Still, it was pretty damn impressive that in the Packers final possession when everyone knew Lacy was going to get the ball, he still managed 27 yards on five carries before Rodgers was able to kneel out the win.

4. Secondary effort
Did anyone play a good game in the secondary on Sunday? Ok maybe Ha Ha Clinton-Dix and Morgan Burnett played reasonably well, but there were quite a few Packers players who were missing in action on Sunday, including a handful in the secondary: Letroy Guion, Julius Peppers, Clay Matthews and Tramon Williams to name a few. And despite what appears to be a pretty decent day based on statistics, Micah Hyde probably belongs on this list of misfits, too.

The two plays most emblazoned in my mind involve Tramon Willams getting third degree burned by a bunch of second-tier receivers. One who is well past his prime and one former Packers seventh-round pick whose career highlight reel is Sunday’s game tape.

Williams has been known to hide injuries in the past, so maybe that was the case on Sunday. Either that or dude was out drinking until three in the morning. Something was definitely up though and that type of play will definitely not fly against the Patriots.

5. Wanted: Davante dividends
This week saw the barrage of comments come to the forefront about how badly the Packers miss James Jones. Not surprisingly this onslaught came on the heels of Davante Adams’ worst game of the year. Right from the get go it was obvious that Aaron Rodgers wanted to make Adams an important part of the offense and just about as often Davante showed why so far he is not.

This rookie is 11 games in and needs to step it the fuck up. Like now. Since Darrelle Revis will likely shadow Randall Cobb all game while a bevy of Patriot defenders take turns double teaming Jordy Nelson, Davante Adams is going to have a major opportunity to shine, if he can ever get on the same page as his quarterback.

The Packers second-round pick hasn’t shown anything to this point that leads me to believe he’s going to suddenly put it all together over the next six days, but that’s what it’s going to take if the Packers are going to have any chance of taking down the Patriots.

Davante Adams must come up huge this Sunday.

6. Where are they? I can’t see them!
Why was it that all the personnel on the sideline were wearing camouflage gear? Was it Gander Mountain Day across the NFL? Were they honoring the opening of gun hunting season?

7. Length matters
Is Mason Crosby hiding an injury of his own? Is he struggling with his technique?

While other kick coverage teams ceremoniously jog down the field waiting for the returner to take a knee in the end zone, the Packers unit is actually required to work and tackle guys who have their sites set on scoring. Mason Crosby used to consistently put kickoffs out of the end zone, but that has not been the case most of this year. Why? I have no idea.

As the weather gets worse, kickoffs tend to fall shorter. Where will Mason Crosby’s end up landing when they’re already falling short in favorable conditions?

8. Cover 2 = Massacre Prevention
Blowout season has officially come to a close folks. Gone are the days of the 50-point massacres. Gone are the fourth, and even third quarter appearances from Curt Menefee in the Fox Studios begging you to not change the channel.

Plenty of folks were baffled as to why teams weren’t playing two deep safeties versus the Packers and quite honestly, I don’t believe that question was ever answered to my satisfaction. Something is telling me I’m not going to have to worry about it coming up again, as the lowly Vikings proved that limiting big plays is your best chance against Green Bay.

If any team doesn’t play predominantly cover 2 the rest of the way, my name isn’t Nathan Arizona.

9. Hang time
Tim Masthay was envious of the height and arc of the Aaron Rodgers to Richard Rodgers scoring strike.

Did anyone else watching think that a whistle must have blown the play dead? I was half-waiting to be informed that there was an illegal motion or false start penalty on the Packers, but nope. And when I realized that no flag had been thrown and no flag was forthcoming and the touchdown would stand… I chuckled.

10. Packers -4?
Wow. I thought the Packers would be favored by 1.5 or 2 and even felt a pick ’em scenario was possible. With the Packers opening as 4-point favorites, I’ll be very tempted to take the Patriots to win outright, thus guaranteeing a Packers’ victory.

This is going to be a fun one.

The Super Bowl will be Played This Weekend

Jordy Nelson is on the Cover of SI 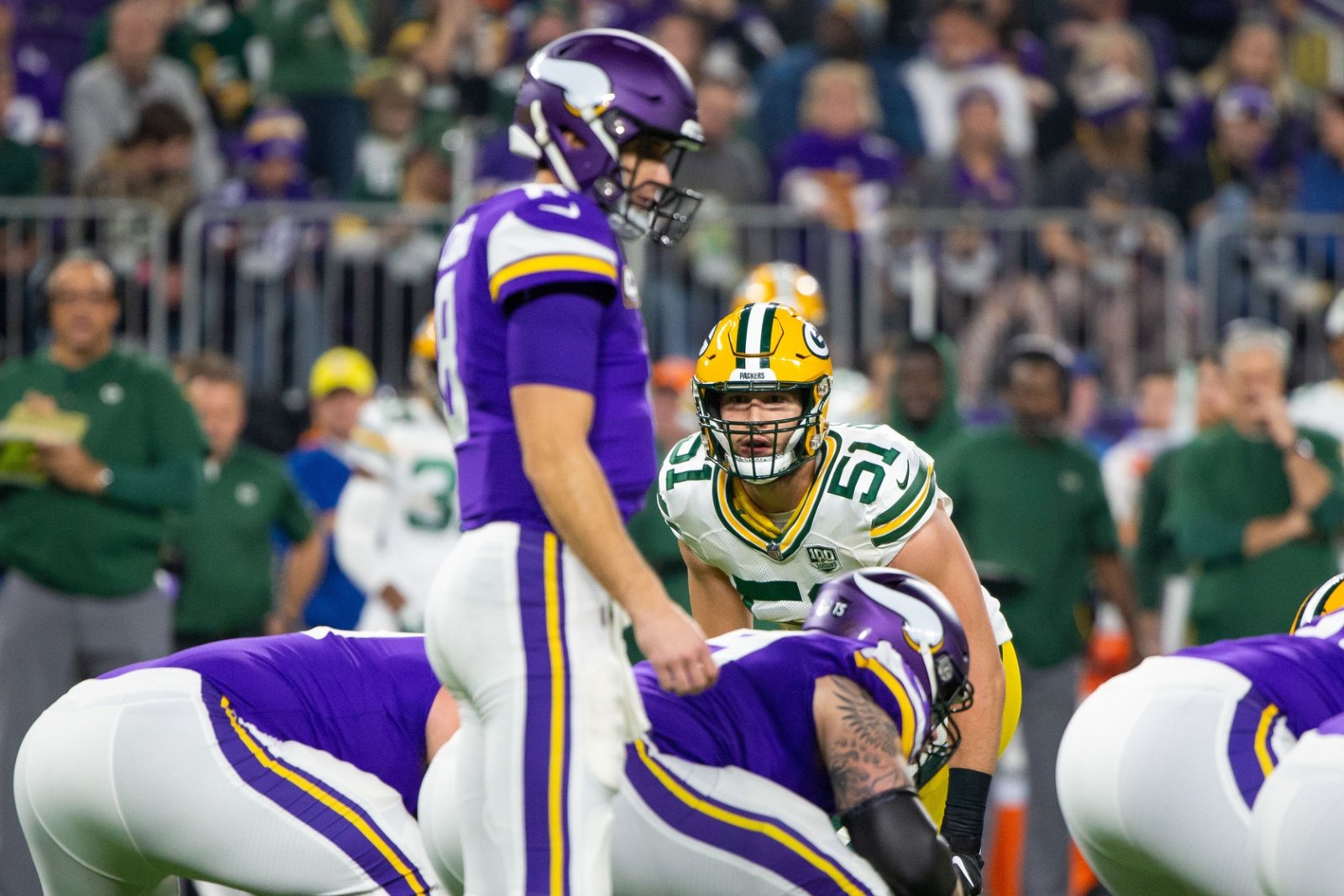 Jordy Nelson is on the Cover of SI