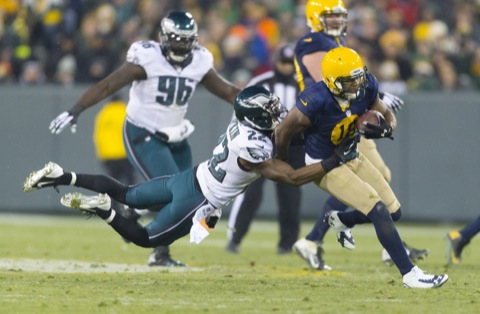 Well that was fun wasn’t it! The Green Bay Packers continue to destroy their opponents at Lambeau Field and the Philadelphia Eagles were no exception. Here are the top 10 things that stood out in this game.

1. The Greatest of All Time
Several years ago, after Aaron Rodgers’ third season and his first as the Green Bay Packers starter, my father asked me what I thought of him and whether or not the Packers had made the right move in going with ARodge over Brett Favre. My answer was about as emphatic as it could be, “I think Rodgers is already better than Favre in some ways and if he can stay healthy he might go down as one of the greatest quarterbacks of all time.”

It was a bold statement, but even as a first-year starter I had never seen a quarterback with such flawless mechanics and footwork. It didn’t matter if he was on the move, in the pocket or jumping in the air as he threw the ball, the delivery was always the same. The throwing motion always perfect.

Although there will always be arguments and discussions about players within certain eras and how this one compares to that one and how this era is different, in my opinion, Aaron Rodgers is as good as anyone has ever been. He brought his own style and discipline to a game that seemingly regarded interceptions as a cost of doing business and he dispelled that. Big time.

Aaron Rodgers has changed the way people look at the quarterback position. He currently is the bar setter and can only best himself at this point.

His performance versus the Philadelphia Eagles in some ways was more impressive than his six touchdown game against the Bears the week before. Sunday afternoon, Rodgers did whatever he wanted. His recognition of the defensive coverage was off the charts. My favorite plays were when Rodgers recognized man coverage and took off running before even bothering with his reads. He didn’t need to make any reads. He already had the only read he needed and was gone.

2. Found a Step
Randall Cobb started off a little slow this year. There were plenty of thoughts lingering in Titletown that maybe he’d never return to form. It’s easy being a fan and forgetting about the major injuries these guys suffer and the time it takes to recover fully.

What’s difficult is not really ever knowing the truth about how a player feels physically. Because when a player is coming off an injury and doesn’t feel well physically, the mental aspects of his game are also going to be off while the player wonders whether or not he’s going to re-injure himself.

I think it is safe to say that Randall Cobb is back to 100 percent. For the first time in over a year I saw all the physical gifts and talents this young man promised us a couple seasons back.

There is something awe-inspiring about the way Randall Cobb moves. The imagery of him running with the ball tucked under his arm and angling sharply up field is ingrained in my memory. While other players were having issues with sharp cuts and slips and falls, Cobb was making moves no one could keep up with.

If we thought Cobb was having a nice season already, look out. I predict his second half is much bigger.

3. My Homeboy Letroy
Letroy Guion has really come on. He makes impact plays every week. On Sunday versus the Eagles his biggest play was a little bit more under the radar.

On the second play of the second quarter with the Packers leading 17-0, the Eagles were putting together a nice drive and had a first down at Green Bay’s 13-yard line. After a LeSean McCoy run got only one making it 2nd and 9, Letroy Guion proceeded to save the day.

When Mark Sanchez dropped back to pass, Guion immediately sniffed out the screen pass to Darren Sproles, sifted through some traffic, and managed to get a bead on the little sucker before dropping him at the 5-yard line.

Instead of what was looking like a well-executed drive for a touchdown, Clay Matthews ended it on the next play when he sacked Sanchez on third down. The Eagles would settle for a field goal and never threaten again.

4. Duck, Duck, Duck
If that’s what Mark Sanchez wants to do every time he gets sacked, he should expect more hits to the head that are correctly NOT called. That being said, I’m guessing Letroy Guion might have gotten a talking to about his head-first technique.

5. Datone it Down
Anyone notice Datone Jones on Sunday? I barely noticed him either.

However he did act the fool when Mark Sanchez had a snap go over his head. When Sanchez covered the fumble and made no effort to get up, Datone Jones smelled a free sack waiting so he vigorously maneuvered through the pile to be the one to touch the Eagles quarterback down. When he succeeded, Jones proceeded to perform an obnoxious celebration while still laying on the ground, like he had actually made a meaningful contribution on the play.

The joke is on Datone though. The aborted snap is ruled as a run and therefore no sack is credited. I’m guessing if Jones would have known that he probably wouldn’t have gotten all excited about making a play that he had no earthly business being excited about.

Come on Datone! Get your sacks the old fashioned way… you earn them!

6. Dom and Dommer
Although we might really never know who’s decision or idea it was to move Clay Matthews to the middle, Packers defensive coordinator Dom Capers deserves a hug. Actually a lot of them. He’s taken a lot of heat over the years, but this decision makes us the team to reckon with in the NFC moving forward.

7. Not So Special Teams
Okay, so the holder dropped the ball… not a huge deal. A second blocked punt on the year? I guess that was the time to give it up, at least.

Special teams under Shawn Slocum has always been a concern, but what is really concerning was the rough outing Mason Crosby turned in. When he wasn’t booting mediocre kickoffs (along with a couple touchbacks) he was squeaking in chip shots, having kicks blocked and missing kicks. This is not the time for him to get cold and lose his confidence. Let’s hope he can shake it off.

8. Just say Mo to Movember
Remember over the past couple years when Rodgers and Mike McCarthy would support men’s health issues by growing a mustache for November? Notice how they have opted against the stache this year? I guess it’s a little more obvious recognizing the mustache as opposed to noticing its absence, but I digress. I personally thought they both looked ridiculous, so I’m all for this change.

Did you know you don’t need to grow a mustache or douse yourself with cold water to support a charity? It’s true!

9. To Every Action, There’s a Massive Overreaction
Look, I know Mark Sanchez played pretty well and the loss wasn’t completely his fault. Still, it’s not as big a win as it would have been facing the starter, Nick Foles. How much drop off is there in this type of scenario? Who’s to say? But I’m of the opinion that when a team is without their starting quarterback, the other team SHOULD win.

Now, of course there are exceptions to the rule and backups can win games, but generally speaking, the Packers with Aaron Rodgers should beat just about any team that does not have their starting quarterback. It was a nice win, but let’s temper the enthusiasm a little bit. This is not a win worthy of massive celebration.

10. Trap Game Extraordinaire
With a big win behind them in the Eagles and a huge game versus New England on the other side of this week’s game versus the lowly Minnesota Vikings, the Packers need to stay focused. This is a massive trap game. But you know what? Great teams don’t suffer letdowns in this spot. I think this team is on the verge of greatness and will throttle the Vikings.

Favorites to win the Super Bowl and number one in the power rankings is not far behind.

Previous Article
Sending off the Throwbacks for the Green and Gold
Next Article
So Long, Adrian Peterson!