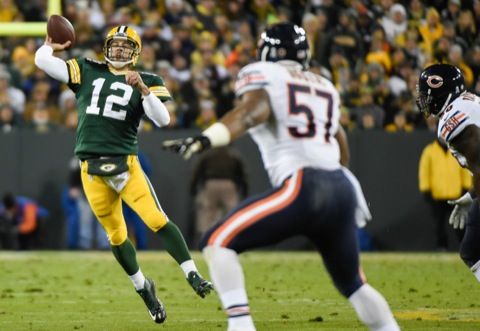 There’s a dichotomy in watching Green Bay Packers football games. There is for me at least. I want Green Bay to destroy teams and play to its potential in every game, through every series, and on every single down. Yet, when that happens and the Packers lay a beatdown on an opponent like they did Sunday night, inevitably the result is boring and the game-watching experience severely dampened.

So once again, since this game was over at halftime, I offer up the five rather than 10 things that stood out most to me in the yawner that was the Packers complete dismantling of the Chicago Bears.

1. A Championship Move
The coaching staff takes their share of grief around these parts and usually it is rightfully so. I try to be as honest as possible with myself and the Total Packers audience and truly call them as I see them. You might want to write this one down. Moving Clay Matthews to inside linebacker is a game-changer and, in my mind, puts Green Bay immediately in Super Bowl conversations. Not only does the move shore up the once pathetic run defense by putting the speedy, sure-tackling Matthews in the middle, it removes Matthews from the edge where he’s been a proven liability against the run time and time again.

Nick Perry doesn’t have such issues against the run on the outside and is possibly the Packers best edge-setter on the roster. With him playing outside more often, the Packers inevitably lose a little bit in the pass rush department, but what they gain in run defense far exceeds the negative. And let’s be real. When Perry is rushing the quarterback from the right side, he’s got big-time power and has been anything but a slouch.

Assuming Clay is in fact on board with playing inside, this is a very selfless move on his part. Oh sure when the microphone is on and in his face he’ll say the right thing and tell you that, “Stats don’t matter and all I want to do is win.” But make no mistake about it — I promise you Clay Matthews loves sacking the quarterback and that stat that comes with it. That’s a very sexy statistic that gets way more attention than it deserves. Tackles? Pretty much the exact opposite.

Also imagine the amount of book-learning and mental preparation that Matthews went through and will likely continue to go through learning a new position. That should not be overlooked. Yes, guys want to help the ball club and win games, but not every player is willing to learn a completely different position. That’s a team-first move by Matthews to go along with this.

Clay Matthews has a chance to do something that isn’t very common in NFL history. He has a chance to make playing inside linebacker sexy and cool. When the hell was the last time that happened?

Big props to Mike McCarthy and Dom Capers for pulling the trigger on this move and for hopefully having the balls to continue on with it.

2. Over! Over! Over!
Was anyone out there sold on my prediction for this game as I tried to steer the readers towards the Packers and the over? The Packers didn’t disappoint in either regard and the books in Vegas probably took one of their bigger beatings of the year. Just about all the late money on the game was on the Packers and the over, which pushed the line from the Packers -7 to -9.5. The over/under went from 53 up to 54.5 so the house definitely took a big hit.

The over is now 6-0 in the Packers last six games.

3. Rodgers that!
I mean what can you say that hasn’t been said? Aaron Rodgers owns the Chicago Bears. That being said, they made it super easy.

4. A Grain of Salt
What can we really take away from Sunday night’s game? Not too much, but some concepts were solidified. Namely that the Bears really do still suck. I actually like their head coach, but it appears fairly obvious that the Bears have already quit on Marc Trestman, whose forthcoming dismissal is no longer a question of if, but when.

The Packers looked good as they always do against Chicago and other poor teams, but the winning result does nothing to alleviate the concerns about how this team will perform against top competition. Don’t be blinded by the high score and the domination of a pathetic bunch of losers who have already given up. This game revealed nothing about the caliber of team the Packers are or aspire to be.

I do have a lot of confidence that moving Matthews to the middle will solve some of the Packers’ defensive woes, but until the Patriots confidently stroll into Lambeau Field in a few weeks, I’m not sure we’ll have any clue how good this team is or how good they can be.

5. DUJUAN!!!
As the score kept getting more and more out of control, the only thing that kept me glued to the box was the hope that my main man DuJuan Harris would get some carries in mop-up duty. Well low and behold, I got my wish! Not only did DuJuan get a few carries, he managed to exit the game as Green Bay’s top rusher on the night. Harris’ eight rushes for 52 yards carried a robust 6.5 yards average and outdid Eddie Lacy’s 14 carries for 50 yards. Granted, Harris didn’t have an epic screen pass go for a touchdown, but with the Packers shifting to several backups on the offensive line late in the game, DuJuan’s performance is probably even a little better than the numbers indicate.

DuJuan Harris rightfully remains the Packers number three running back, but it is not a product of him being a third-string player. Rather, it’s a product of being behind two really good running backs. James Starks only carried five times for 10 yards versus the Bears, so maybe the competition for backup to Eddie Lacy is getting a little closer. I like both Starks and Harris but still argue the latter is the most electric ball carrier the Packers have.

Previous Article
So Clay Matthews is an Inside Linebacker
Next Article
Five More: Packers 55, Bears 14