Sending off the Throwbacks for the Green and Gold 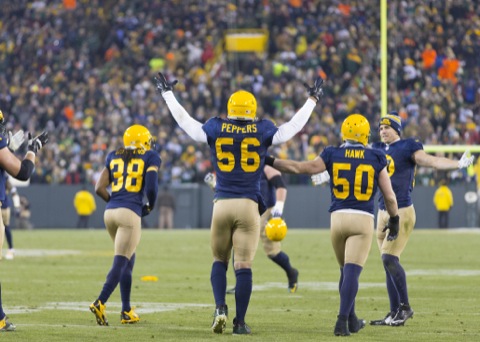 I — along with millions of other Green Bay Packers fans — am most elated indeed by the smack down the Packers put on the Eagles this past Sunday. Indeed, such dominance over one of the better teams in the NFL gave me that post-orgasmic glow feeling of elation and well-being I often experience when our Packers are rolling, as endorphins flood into my bloodstream. This time it is not just a blowout, but a signature win announcing the promise of continued dominance over anyone we face this year: dominance which might just culminate in yet another Super Bowl championship, fulfilling our birthright and destiny.

I will be even more pleased, however, if Mark Murphy and crew decides to let the Acme Packers throwbacks exit stage left on this high note. As history dictates, I am sure my comments will not be met without controversy, even from Packers fans. Not that such controversy has ever stopped me before.

Even though the more comfortable cut of the pants has been carried over to the Packers’ primary uniforms (the main reason Aaron Rodgers fancied them), there are many arguments in favor of retaining these year in and year out.

Most obviously, they are a tip of the cap to Curly Lambeau’s early championship teams. That matters a great deal. However, after having several games with these throwbacks over a number of seasons, that purpose has been fulfilled.

Those who were not aware of this uniform from the Packers’ heady days as an upstart nearly a century ago are aware of them now.

Others mention that the Packers are undefeated when wearing them. Never mind that four games is a small sample size.

As in the past, yours truly can only recommend the wise words of wisdom of comedian and misanthrope Jim Florentine, who regularly mocks silly superstitions by both athletes and fans alike. The most poignant example he gives is that, as a San Francisco Giants fan, his son was in their hospital during the first of three World Series titles. During their second appearance, he did not give a second thought to the notion that not having his son in this hospital might jinx them. Similarly, the throwbacks have little if anything to do with Sunday’s beatdown, aside from perhaps the psychology of a self-fulfilling prophecy.

The arguments in favor of sending off the throwbacks while on top are far more persuasive — among them the ability to retire them while still undefeated. Going beyond that, however, these uniforms are just not appealing to the eye, objectively speaking at least.

Search “ugly NFL throwbacks” and sadly, you will find that these Packers’ throwbacks are featured prominently, more than the Steelers infamous “bumble bee” getup and indeed more than the Broncos piss yellow and shit brown Milk Dud disaster a few years ago.

Beyond that, and more importantly, is the missed opportunity of one more home game at Lambeau dressed in home greens. Every single time our Packers suit up in their home greens is a sight to behold. The Green and Gold, replete with white trim work so well. The look so classic, so timeless, I feel that endorphin rush alluded to earlier by the mere thought or mention of them. Indeed, the Green and Gold is really what it is all about.

Above all is the brandishing of that oval G symbol on the helmets — a subject on which I have written before.

Neither I nor anyone could ever wax and wane enough about its absolute perfection — perfection in aesthetic appeal, graphic design and in what it represents to so many millions. That iconic logo — which by itself represents the team and its legions of diehard fans who invest so much time, emotion, love and anguish in this team — is without parallel. It ranks right up there with the Yankees famous interlocking NY logo in history, mystique and visual appeal. That is precisely why it should always be adorned on those helmets. Always.

Indeed, that oval G symbol represents the Packers — the players, the staff, the history and its sprawling minions of fans — in the same way that the crucifix represents Jesus Christ and the religion of Christianity. I know I embrace that oval G symbol with equal if not greater ardor than the most devout religious fanatic. I believe in that oval G as much as anything in the known universe. I embrace that symbol with unbridled passion, zealotry and fanaticism. As great as Sunday’s display of dominance was, it would be even better if we could gaze yet once more at all the Gs on those helmets, with the donning of the Green and Gold the way only our boys can. 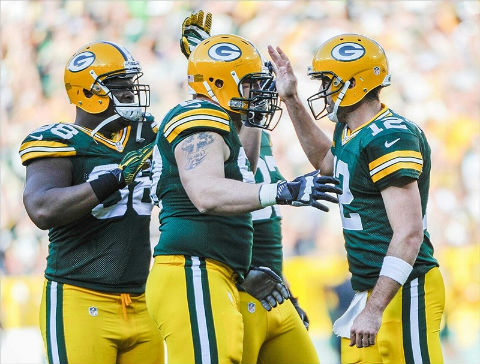 Some in our midst will state they do not care what our Packers wear if they win like this. Some will say they could go out on the field in all pink and it would suit them fine. But how many of you would have been drawn to the Packers initially, and indeed how would you feed and nurture this growing obsession, this fanaticism, this boundless passion, without the allure of such classic unis and one if not the most iconic symbol in all of sports?

Uniforms, colors and symbols matter. Just like language, they are used to represent ideas and concepts. In the instance of the Packers, those uniforms, those colors — and above all that oval G symbol — signify everything we love about the Packers: history, tradition, excellence and a mystical aura; the legacy of Vince Lombardi, Bart Starr, Ray Nitzschke and all the others that would fill a paragraph; the unique legacy of a team situated in a small Midwest town that could never seat a billion dollar, storied NFL franchise, but for that proud history and tradition of excellence, of winning, of championships.

All of that and more is signified by that mark, those colors, and that uniform. I, for one, long to behold such magnificent splendor each and every Sunday the Packers take the field, in Green and Gold and marked by the Oval G. It is one of my great passions in life if not my one great passion in life — a passion I know I share with millions. Those Green and Gold colors, that Oval G symbol not only represent that passion, they ARE that passion.