Perry, Bush and Lang Are Your Non-Participants 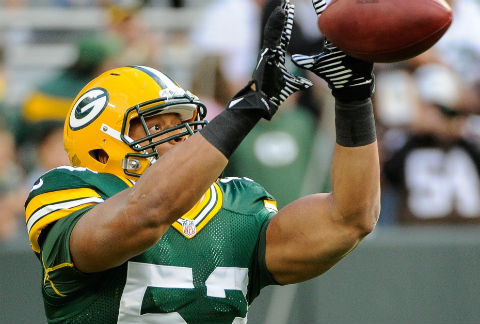 Outside linebacker Nick Perry, cornerback Jarrett Bush and guard T.J. Lang were non-participants in practice on Wednesday, as the Green Bay Packers prepare to face the New England Patriots.

No real surprise there.

Both Perry and Bush missed the win over Minnesota. Lang aggravated the ankle injury that’s kept him out of practice the past few weeks in Minnesota, but finished the game.

There appears to be no doubt that he’ll play on Sunday. Coach Mike McCarthy even suggested Lang’s practice workload is likely to increase this week.

As for Perry, who’s absence — for some reason — seemed to throw off the entire defense last week, it’s wait and see.

With Perry out, the Packers moved Clay Matthews from inside to outside linebacker. That equated to a lackluster day by both Clay (2 tackles, no sacks) and the defense as a whole.

The good news on Wednesday is that the Packers didn’t have any surprise additions to the injury report like they usually do. In fact, two guys — tight end Brandon Bostick and guard Josh Sitton — returned to practice.

Bostick has missed the last two games and, much like Lang, Sitton has been playing but not practicing because of a toe injury.