by Monty McMahon
in Uncategorized
71 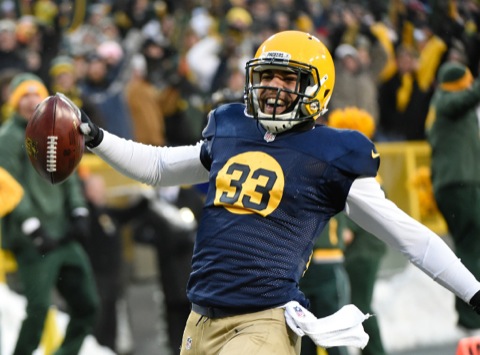 Did we tell you the Green Bay Packers were a force to be reckoned with when playing at Lambeau Field this year? They proved that beyond a doubt by throttling their strongest opponent to date — a Philadelphia Eagles team that came in 7-2 — 53-20.

Much like last Sunday’s curb stomping of the Chicago Bears, this game was essentially over by halftime. The Packers held a 30-6 lead at the break, highlighted by two Aaron Rodgers’ TD passes and a 75-yard punt return for a touchdown by Micah Hyde.

It was more of the same in the third quarter, when linebacker Julius Peppers got in on the act by returning an interception 52 yards for a touchdown. That made the score 39-6.

If you were watching the game in a market outside of Wisconsin, you got the old “We’ll be taking you to a more competitive game” bullshit before the third quarter was even over. That about says it all.

For the Packers, it was the same story we witnessed last week.

Offensively, Aaron Rodgers was on fire, completing 22-of-36 for 341 yards, three touchdowns and no interceptions. Both Jordy Nelson (107 yards) and Randall Cobb (129 yards) had huge days. And although the running game was once again a total afterthought, Eddie Lacy still got his with 69 yards rushing and 45 receiving. Lacy also had two scores, one on the ground and one through the air.

Defensively, the Packers continued to be much stronger against the run than the unit we saw before the bye week. With Clay Matthews again playing inside linebacker, the Packers held Philly to 109 rushing yards and 3.5 yards per carry. The defense also continued to do what they’ve done all season — get after the quarterback and create turnovers.

The Packers had three sacks and created four turnovers. Two of those went back for touchdowns. Casey Hayward joined Peppers by returning a Buttfumble fumble 49 yards for a score in the fourth.

We’d tell you the special teams had a great day too, but the Packers somehow botched two extra points, Mason Crosby missed a 50-yard field goal and Tim Masthay had a punt blocked late in the fourth. So despite the Hyde return, it was pretty much a garbage day by the special teams.

Nonetheless, this was an impressive victory by the Packers. They beat the shit out of what is most likely a playoff team and quite possibly the NFC East champ.

In the process, they’ve clearly established that they’re an elite team… at home. If the Packers can carry this sort of play over to their road games, then we’ll start entertaining thoughts of a deep playoff run.

Jamon Meredith Out, Justin Perillo In