New England Patriots: The Ugliest Disgrace of All

by E. Wolf
in Uncategorized
179

Now that the Green Bay Packers have defeated the Minnesota Vikings at Gopher Stadium, they simply MUST carry forward and defeat the New England Patriots — preferably in blowout fashion. Aside from the importance of racking up yet another win to stay ahead of the Detroit Lions in the race for the NFC North — and the home playoff game and probable bye week that comes with it — and aside from the sort of “statement win” this will be, the Packers must win simply because the New England Patriots are one of the most repugnant, despicable entities not just in sports, but perhaps in all of American popular culture.

That, of course, is up against some pretty stiff competition. So let us count the ways and reasons why one ought to hate this disgrace that is the New England Patriots. Their coach, their quarterback, their owner, their fans and their fugly uniforms and symbol are just some of the reasons why we should all revel in our hatred and contempt for this shameful disgrace, this pariah of the NFL.

As one of the most successful head coaches in league history, it is telling indeed that the only saving grace of Bill Belichick is his professional acumen. Those ridiculous hooded sweatshirts he wears, that permanent look on his face as if someone pissed on his Cheerios, his rude, dismissive manner towards journalists and everyone else on the planet all demonstrate what a horrible human being this man is. Wholly unfamiliar with even a semblance of sportsmanship, he runs up scores and is such a sore loser he hardly even shakes hands when he does so. 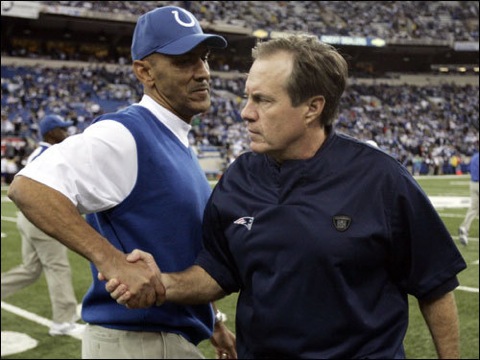 Of course, there is room to question Belichick’s status as one of the greatest of all time, as he has not been able to win a championship since the Patriots’ Spygate scandal was unearthed. It cannot simply be coincidence that such an unstoppable offense like the Greatest Show on Turf  just happened to be hampered only by the underdog Patriots. The two other Patriot titles that followed were also won under the narrowest of margins — narrow enough for such cheating to be the difference.

Perhaps that adage taught in grade school how “cheaters never win” may not be true after all.

The dynasty period of the last decade is rendered more dubious by the consideration that it may never have happened at all, but for that infamous “Tuck Rule” game, which has proven to be even more fortuitous for the Patriots than it was disastrous for the Raiders. Particularly after a decade of postseason failure, it begs the question — is Belichick an evil mastermind who succeeded on the basis of both unconscionable dishonesty and cheating, as well as a robust horseshoe lodged deep in his ass?

Tom Brady is not much less loathsome. A pretty-boy, metrosexual playboy who peddles Uggs — a label indelibly linked to the fairer sex. As much as I hate Randy Moss, as a player and a human being, I must concede he was right about one thing; Tom Brady did look like a girl. 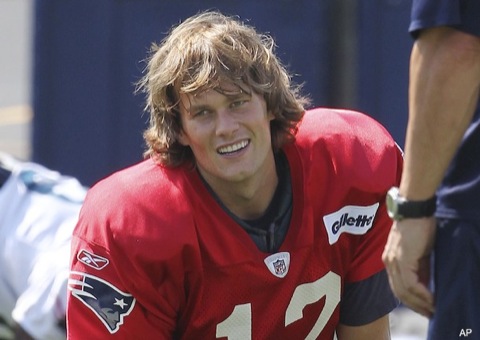 Such womanly attributes are only further pronounced by how much he pouts to referees whenever a defensive player lays a finger on him.

Most damning of all, the single greatest rule change behind the increasing marginalization of defenses in this league can be attributed to him. The so called “Brady Rule” practically relegates contact of the quarterback to flag football rules.

All of this is made only that much more insufferable by the endless pandering of idiots like Chris Berman, Tony Kornheiser and others of similar ilk who drone on endlessly about how great Tom Brady is ad nauseum.

The hate train does not stop there. That dark choo-choo train keeps rolling down those choo-choo tracks! The New England Patriots owner, Robert Kraft, is even more unlikeable. There cannot be a more typical point-one percenter — not one-percenter, but point-one percenter — who profits off the huddled masses. I cannot imagine supporting a team if it meant lining the pockets of a guy like this: 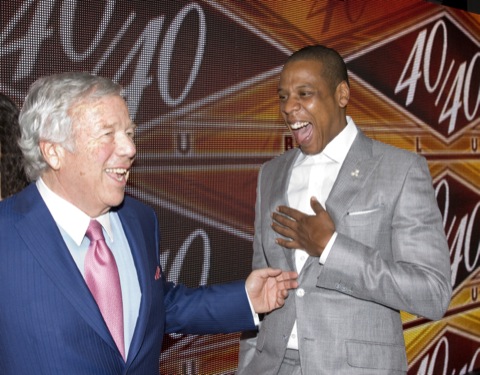 The smugness, arrogance and self-satisfaction of this über-rich asshole is beyond cringe-worthy.

But it gets worse. Upon the death of his late wife, Myra Kraft, he appealed to schmaltzy sentimentalism of the worst sort, perhaps no better represented than these kitschy in-memoriam patches that some people somehow think shows “class.” 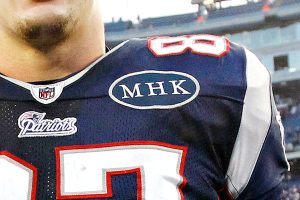 The sappy sentimentality was piled on even further with promotional flyers like this. As if professional athletes are really inspired by the death of a wildly privileged socialite like Myra Kraft, who has nothing in common with any NFL player except perhaps those born into wealth like the Mannings or Johnny Manziel. The schmaltzy aftertaste is enough to make one vomit as is. But this nausea inducing “tribute” is accelerated yet further by a single consideration — within a year of this privileged socialite dying, her husband pulls a Donald Sterling with some tramp half his age. 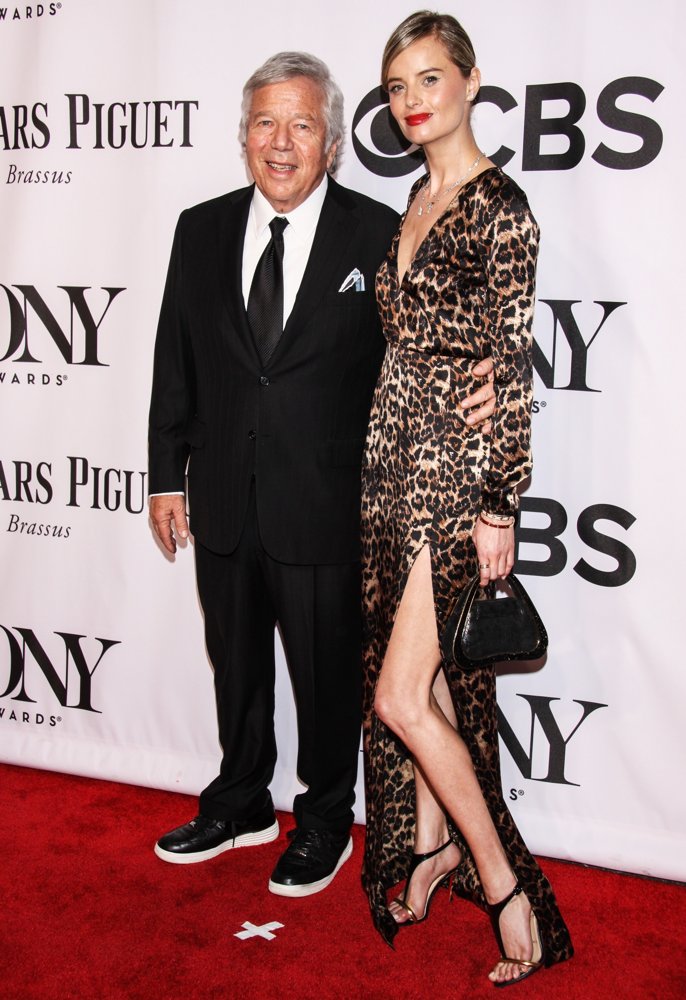 It truly beggars belief that even a man entitled with such unimaginable wealth would have the gall, the chutzpah to feign mourning for his wife and to plaster his team’s uniforms with a piss-poor imitation of the Chicago Bears’ GSH initials (in memory of George Stanley Halas), only to compound the distastefulness of such disingenuous sentimentality by frolicking with a woman young enough to be his granddaughter 15 minutes later. All in plain sight for all to see, without even mimicking any semblance of discretion or propriety.

Of course, one must remember that only a small portion of the proverbial iceberg is ever visible, so it stands to reason this sort of thing was going on long before, likely with a stable of gold-digging harlots just like this.

Adding more fuel to this insufferable inferno is a deluded, front-running fan base that struts about, each and every year, with absolute assuredness that the Patriots are going to win the Super Bowl. This is a self-evident proposition and will only be mentioned in passing.

Living in New York City, one such as yours truly is exposed to this odious sort far more than I care to be. It is rivaled perhaps only by Yankees fans, who up until recently carried on the same way.

Still, there is a particularly noxious stench to the Patriots fan that one can only truly appreciate by living here in the Northeast. Perhaps it’s because every single person outside of New England, almost to a man, hates the Patriots the way saints hate sin.

Perhaps above all that — above the despicable people who comprise the team and its ownership, above the arrogance and presumption of the most self-entitled fan base ever — are how this team shat all over their heritage and traded their classic uniforms of old for the arena league getup they now don.

Aside from the smug arrogance, the this-and-that talk about the “Patriots Way,” the Spygate cheating scandal which should have, if not gotten Belicheck banned from the league forever, at least earned him a one-year suspension, the Patriots traded in a truly classic uniform for a uniform that is both ugly, unoriginal and uninspired.

A color palette of dark blue and alternating white and silver is perhaps the single greatest overused palette in football. It has been used so many times before there could not be a look more lacking in originality. 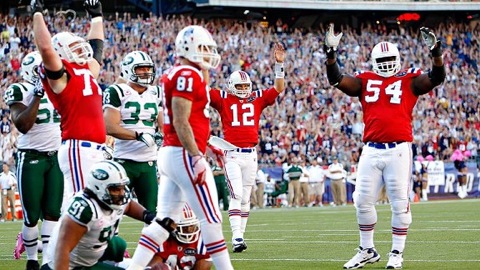 Worst of all is that that fugly flying Elvis logo they have adopted as their mark.

Soulless, sterile, and uninspiring, it looks more fitting for a mutual fund or insurance company than an NFL football team.

To be most charitable, it might pass for the symbol of an Arena League team. With the exception of that flaming T in a circle bit of the Titans, which seems more fitting for a rice car than an NFL team, even expansion teams like the Panthers, Jaguars and Seahawks have better symbols. I dare say that the logo for Paul Revere pizza would be better suited than this disgrace. 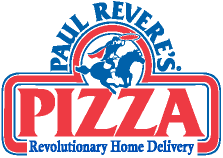 The Flying Elvis is not only uninspiring, it is unappealing to the eye. It looks as if it originated from a high school graphic art project with a B- grade. The hat does not depict the tricorner hat of the period at all. The chin is exaggerated to comical proportions and the downward curl of the lip looks as if the figure is wincing after mistakenly putting spoiled cream in his coffee. The blueish-silver tone of his face depicts no living person I have ever seen, as it is better fitted to someone dying from advanced hypothermia. The dark spots for the eyes further render a lifeless appearance. Perhaps it is meant to depict a “zombie” minuteman, although that is doubtful.

Another reasonable impression would be that the figure has a black eye from a recent pummeling.

That heinous logo combined with the utterly uninspiring color palette and uniform design together create a look that is both unappealing aesthetically and utterly sterile and soulless at its very essence. When placed in contrast with teams of truly great tradition and history, such as our illustrious Green Bay Packers — teams who do not tread on their colors or look with each passing whim, with each new fad — the difference is obvious, the choice crystal clear.

Indeed, there is no better subject to juxtapose our Packers with which illuminates everything that makes the Packers so great. All but overshadowing the highly dubious success the Patriots have enjoyed, which climaxed almost a decade ago, our Packers have nearly a century of tradition and excellence.

And in spite of being in the wilderness for some 25 years, we never betrayed our colors or abandoned our mark, that magnificent Oval G symbol. Nor are we beholden to some über-rich scumbag owner. Likewise, an inherently despicable asshole like Belichick could never fit in Green Bay, just as Tom Brady’s pretty boy personage would be equally anathema to everything the Green Bay Packers stand for.

All of these and more are reasons why our Packers must win on Sunday — and above all in any eventual matchup in this Super Bowl. Above racking up another win pushing the Packers closer to the NFC North division crown and a home field playoff game and first-round bye, our Packers must win to put these cretins in their place and punctuate how superior they are in every way, intrinsically and on the field of play.