There Are Green Bay Packers in Pitch Perfect 2 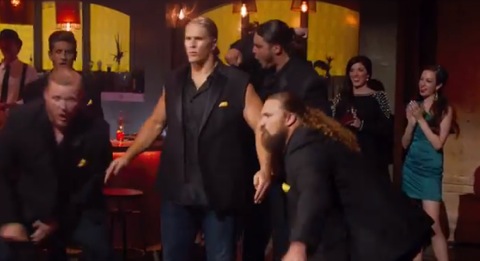 Some people are obsessed with the movie Pitch Perfect. So much so that, at one time I said, I should watch this to see what all the fuss is about.

I did not make it more than 20 minutes in. That movie is fucking awful. Unwatchable tripe.

It’s about a cappella singing competitions that just break out in random places, as far as I could tell. Like — walking down a dark alley? Sing off!

I imagine it’s to singing what Bring it On is to cheerleading. And no, I did not watch that garbage dump of a film, despite my enjoyment of cheerleaders.

But look, naturally there would be a Pitch Perfect 2. Because if we know anything about Hollywood, it’s that if something is successful, then it is to be recycled over and over and over again.

Yeah, you read that right.

Okay, those guys don’t actually star in the picture, but they are in it. It appears they are singing in one of the random sing offs. They have a nice little routine too. Rip sleeves off Clay’s jacket at beginning of performance! Rawr!

Really, what the fuck is going on here?

Hey @AlexisKnapp the packers O-line wants in on #pitchperfect 2. What do we have to do to be in it? #secretlyaddicted

Anyway, we know you’re dying to see this. Check out the trailer and watch for these clowns around the 1 minute mark.

Now, here’s the real question. Which one of these wide bodies do you think boned Rebel Wilson?