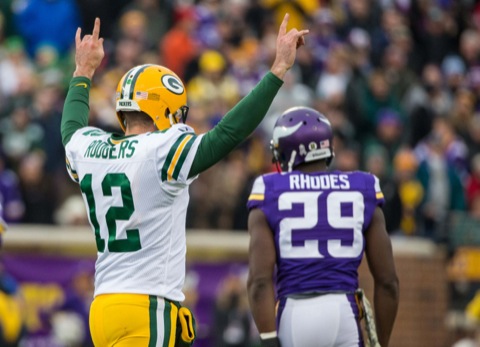 Well, the Green Bay Packers are in first place after scraping by the Minnesota Vikings on the road.

The road is obviously the Packers kryptonite. We’ll seriously learn something about this team when they play the New England Patriots, who are currently the AFC’s No. 1 seed, at home next Sunday.

But that’s nearly a week away. Here are five more thoughts on the win at Minnesota.

Clay Matthews — back to being a non-factor
You, the Packers and Matthews himself can blame whatever you/they choose for Matthews no show on Sunday. Yeah, there’s the recurring groin injury, which has taken the place of the annual hamstring injury. Maybe that slowed Matthews down. There was Nick Perry’s absence. Perry was out with an injury of his own — also an annual occurrence — and that made the Packers move Matthews back to outside linebacker. As you’re well aware, Matthews has been about a million times more effective playing inside linebacker. Whatever it was, Matthews had just two tackles on Sunday and no sacks. In the process, one thing became pretty clear. The Packers defense, which I think we would all agree was nothing more than average, goes as Matthews goes. If the Packers can’t put him in position to make plays, then their defense isn’t going to play very well.

Speaking of that position switch…
Did Mike Neal get caught boning Mike McCarthy’s wife? With Perry out, the logical thing to do would be to start Neal at outside linebacker and leave Matthews inside. Instead, the Packers moved Matthews back outside and started the underwhelming Sam Barrington next to the underwhelming A.J. Hawk. For those of you who have forgotten, Neal outplayed Perry last season. Starting him would have allowed Matthews to remain inside where he’s been more effective. It’s a moot point, but it’s also a move that didn’t make much sense.

Feed the beast
The Packers gave Eddie Lacy 25 carries on Sunday. That’s the first time all season he’s had more than 17 carries in a game. Sunday also marks just the second time Lacy has gone over 100 yards this season. I know everyone wants to see Aaron air it out — and let’s face it, Aaron will pout if he doesn’t get to air it out — but Eddie Lacy is being wasted if he doesn’t get 20 carries a game.

That guy
Remember Greg Jennings? He had a few good years with the Green Bay Packers. Then he went and signed with the Minnesota Vikings because… let’s not sugarcoat it. He’s a greedy, selfish fuck. Well, he may as well have retired. Did you notice all the plays Jennings made on Sunday? No? Then you must have heard about all the plays he’s made this year and last? No? Oh, right. That’s because he doesn’t make plays. A product of playing with Favre and Rodgers. Remove Favre and Rodgers? Garbage.

There’s the game plan
I’m talking about the one to beat the Packers. The Vikings had it on Sunday, they’re just the Vikings. They’re not good enough to beat the Packers. Still, other teams should take note. Take away the outside receivers as priority No. 1, which will keep Aaron Rodgers in check. That opens up the middle of the field, but we all know the Packers often like to pretend that part of the field doesn’t exist. Surprisingly, they did a good job of taking those openings on Sunday, but that’s neither here nor there. The Vikings took away the big play, which forced the Packers to be much more methodical in their offensive approach. It also kept scoring down and forced the Packers to play some defense. That’s exactly what you want to do against this Green Bay team. Keep it close and force them to play defense.