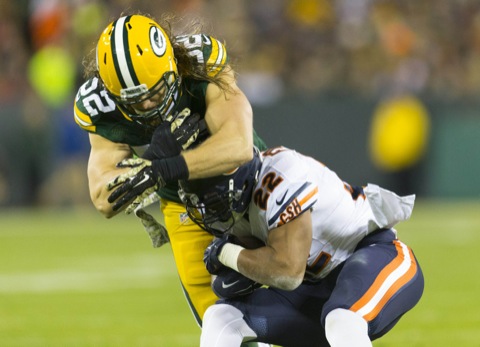 “Yeah, I got some heat from a few of the guys around here about that,” Matthews said. “But, no, there’s not much truth to that. I think any time there’s a position change – as I mentioned last week – there’s some hesitation obviously with what I was comfortable doing.

“I think anytime you’re put in position to make plays like that week, it’s not only going to benefit yourself, but it’s going to benefit the defense as well. Yeah, in a perfect world, I’d love to line up outside 100 percent of the time, get sacks, but we were able to do that from a different position. It worked out.”

So, yeah. Like we said earlier this week, Clay wants his sacks.

And just think if his debut at inside linebacker hadn’t been successful. There would probably be all kinds of pouting going on in Green Bay this week.

Instead, everyone is excited about the Packers actually having an inside linebacker who can, you know — make plays! Matthews had a team-high 11 tackles and a sack from the position against the Bears.

Well, everyone except Matthews is excited about that, anyway.

He’s playing the old I’m a team player card, as well he should. At the same time, you can tell from what he says that he’s pretty much ready to move back to outside linebacker at any time.

“I’m sure they’ll have – much like some of our personnel early in the season – a lot of moving around,” Matthews said. “Teams will try to combat that. Like I said, we’ll see what that means moving forward.”

“Please move me back to outside linebacker!”

Oh, yeah… we added that last part ourselves.

As you’re probably aware, the Packers have made similar positional switches in recent years. None of them have yielded very impressive results.

Hawk was average before and average after. Kampman was a Pro Bowler before and lost after.

There have been a number of guys who’ve moved from outside linebacker to inside linebacker since the Packers have employed the 3-4, as well. Brad Jones, Jamari Lattimore and Carl Bradford come to mind. These moves came because these players were able to make little to no impact on the outside.

It’s too early to make a call on Bradford, but neither of those other moves have been a roaring success. Jones shouldn’t even have a job and Lattimore, although he’s shown flashes, is maddeningly inconsistent.

He’s also part of the reason Matthews was moved to the inside.

Just because the Packers haven’t had much success in this area before, doesn’t mean they won’t this time. Matthews is a legitimate playmaker, not a guy who failed at playing another position or one who moved because he was deemed too small to fit a schematic ideal.

Unfortunately, the Packers don’t play the Bears every week. We’re going to expect results, but not necessarily THOSE results.