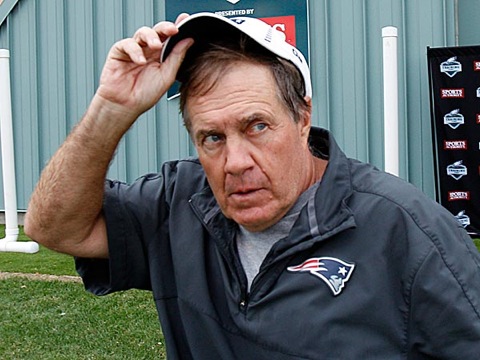 The hype machine for Sunday’s matchup between the Green Bay Packers and New England Patriots is fully cranked up because, super-aweseome sports media! Woooooooooo!

One of the super-awesome subplots of the game will be Packers quarterback Aaron Rogers vs. Patriots quarterback Tom Brady, even though they’ll never be on the field at the same time.

They will be dueling like a couple of gunslingers meeting in the middle of town at sundown though. Or something…

Fortunately, this is not lost on super-awesome sports media folks, who have ALL KINDS of compelling questions.

Like, “Tom, do you prefer a loofa or a washcloth?”

Brady is clearly a loofa guy, but that’s not the point here. One of these super-smart media hacks flung a question that went something like this at Patriots coach Bill Belichick today.

“Can you talk about the similarities between Brady and Rodgers?”

No, Grumblelord could not talk about that. At least in any substantive way because that’s for media hacks like you to do, media hack. And so we got this.

Bam! That’s exactly correct and really, the only similarity that needs to be discussed.

It isn’t quite there, but this game is taking on a level of media idiocy close to that of the Super Bowl. Thank god it’s only a few days away now and not another week out.

I don’t think I could take anymore of the over-analysis of shit that doesn’t matter.

Tomorrow: What each quarterback ate for Thanksgiving and who shit first.