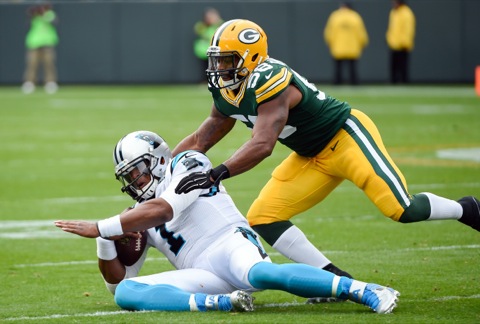 First it was Brad Jones. Then it was Jamari Lattimore. Now, it’s Sam Barrington. Kind of.

Those are three guys the Green Bay Packers have started at inside linebacker next to A.J. Hawk this season. Barrington was a surprise starter in place of Lattimore the past two games. Lattimore, however, still played heavy snaps in both.

That would suggest the Packers don’t really like what either guy brings to the table.

On Thursday, coach Mike McCarthy was asked if he had settled on a full-timer at the position. No, he hasn’t.

“As far as the opportunities for the other guys, we’re still working those guys because I do want to stay the course of playing as many different combinations as we possibly can,” McCarthy said. “I just feel we’re a better defense when we play more players.”

This is where the argument about leaving a guy in so he can get in a groove comes in. We’re not talking about fat-ass defensive linemen here. These guys shouldn’t get tired after playing two snaps, so you want to get your inside backers in the flow of the game.

The only way they do that is if they’re in the game.

As you probably know by now, we prefer Lattimore. We’ll take his playmaking ability and live with the occasional lapse in judgment. Barrington is just a guy and the Packers already have one of those playing the position in Hawk.

For now, we’re just going to assume not to expect anything out of any of the Packers inside linebackers.

Door Open for Lang, Sitton to Play This Week