Aaron Rodgers was Not Trolling 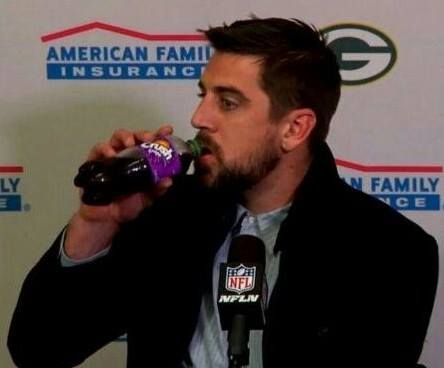 Well, this moronic fucking controversy can be put to rest. Aaron Rodgers says he was not trying to be funny, send a message or troll the Minnesota Vikings by drinking a Grape Crush during his post-game press conference on Sunday.

“Seven years. To all the idiot trolls out there, seven years,” Rodgers said. “PBJ and Grape or Orange Crush. It’s been grape for the last five, the first couple years it was orange or grape. Seven years.”

What’s he blathering on about there? The fact that he eats a peanut butter and jelly sandwich and drinks a Grape Crush after every game. Like a five-year-old…

It isn’t clear if his mommy packs those in his knapsack for him or if they are provided by the Packers.

“Anybody who knows, any of the local media or anybody who’s seen me after a game, I’m always carrying that around with me. That’s probably the only soda that I ever drink – right after the game, when you’ve got to get those nutrients back with you,” Rodgers said. “So that’s my post-game [snack] – PBJ and the Grape Crush. I do like it, contrary to anybody who thinks I was trolling anything. It’s absolutely ridiculous. It’s comical.

“I don’t do those kind of things.”

Lots of nutrients in soda. If you consider sugar and sodium to be nutrients.

Really though, let’s think about this for a second. Aaron Rodgers drinks Grape Crush after every game for seven years and this is the first time he’s taken a bottle to his post-game presser AND it just happened to be after beating the Minnesota Vikings?

Not that I give a shit about this nonsense, but I find it hard to believe the guy who remembers who didn’t like his arm strength nine years ago didn’t think there would be any significance associated with where and when he drank his Grape Crush.

Previous Article
Jordy Nelson is on the Cover of SI
Next Article
Total View: Packers 24, Vikings 21