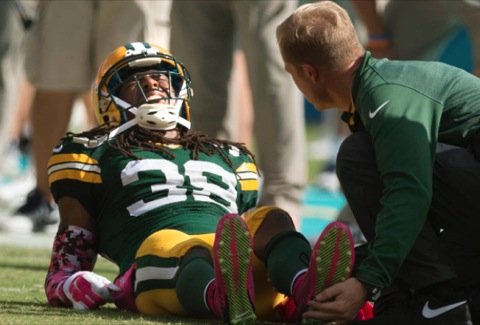 No one is ruling them out for Sunday’s game just yet, but neither one of the Green Bay Packers starting cornerbacks — Tramon Williams and Sam Shields — practiced on Wednesday.

Shields injured his knee doing absolutely nothing and Williams injured his ankle after the bane of our collective existence, Brad Jones, rolled over on him during the Miami game.

After practice, Buffoon suggested Shields’ injury is worse than Williams’.

“How I view their opportunity, they’re both veterans. We’ll give them every opportunity to get ready,” Mike McCarthy said. “Tramon is closer to returning than Sam.”

Neither player has a serious injury, which would mean a tear in either case. However, we have a recent example of how the Packers have dealt with an ankle sprain, which is what Tramon has.

Datone Jones sprained his against Minnesota. He was a limited participant in practice late last week, but ended up being inactive on game day.

Tramon seems likely to follow the same path, especially since he didn’t participate at all today. And, if Buffoon knows what he’s talking about relative to the severity of these injuries, then Shields certainly won’t be playing this week.

That would mean the Packers will start Davon House and Casey Hayward and use Jarrett Bush extensively. We’ll likely also see a lot of safeties Micah Hyde, Morgan Burnett and Ha Ha Clinton-Dix all on the field together, as well. Maybe even a Sean Richardson appearance somewhere other than on special teams.

And that’s probably just fine because name me one receiver who plays for the Carolina Panthers.

Yes, Kelvin Benjamin, but you only know that because of fantasy football.

In other injury news, inside linebacker Jamari Lattimore, receiver Jarrett Boykin and Jones all went on a limited basis today. Lattimore suffered what has been termed a stinger in Miami. Boykin hasn’t played in two weeks because of a groin injury and probably won’t see the field much when he does return because of the emergence of Davante Adams.

Clay Matthews Has Some Excuses For You

Clay Matthews Has Some Excuses For You