R-E-L-A-X was Taped to Lambeau Field 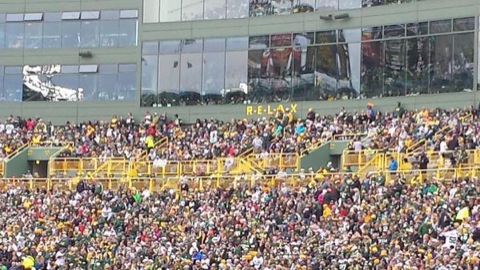 Remember when the Green Bay Packers were 1-2 and we were all up in arms because the defense was its usual sucky self and the offense was worse than that? That’s when one of Aaron Rodgers’ handlers came up with the infamous relax line for Aaron to say, Aaron practiced it in the mirror a bunch of times and then went on his radio show was like, “Hey, fans — R-E-L-A-X.”

And we rejoiced, not because we thought the Packers were anything other than garbage, but because unlike the Chicago Bears, we have a quarterback who can spell.

Anyway, the Packers have been on a roll since then, which also coincides with the day that Rodgers apparently pulled his head out of his ass.

What Rodgers’ “R-E-L-A-X” proclamation meant was actually, “Relax. I have pulled my head out from the area in between my butt cheeks and promise to start throwing touchdowns again.”

And so it goes.

But yeah, some weisenheimer did a cutout of R-E-L-A-X and taped it to the facade inside of Lambeau Field yesterday. There it is right there below the club seats. Well done, smart guy!

Now, for your daily dose of homoeroticism, Frankie Goes to Hollywood!

Davon House is Good to Go

Davon House is Good to Go