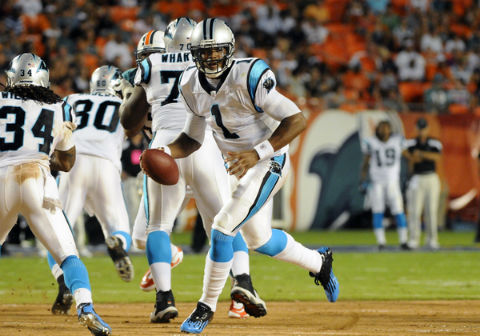 Shawn (4-2) — The 3-2-1 Carolina Panthers — no, that wasn’t a countdown; that is their actual record — come to Lambeau Field on Sunday where I hope they will be soundly smacked and sent south for the winter.

Initially, I thought this should be a pretty tough game for the Green Bay Packers. After all, the Panthers were a top-four NFC team last season, and they already have wins against both the Bears and the Lions, making them Packers fan favorites until this Sunday.

Maybe I’m just fooling myself, but when I looked a little closer at all their games this season and how they rank on both sides of the ball, I find myself leaning towards a Packer cover this weekend. The Packers are currently favored by 7, by the way.

The problem for the Panthers is that it seems like during the offseason they traded defenses with Dallas. Just one season after being one of the best units in the NFL, the Panthers have been woeful on defense so far this season.

The Packers rank dead last against the run coming into this game. However, that is partially the product of having faced the most rushes of any team in the NFL — 201. The Panthers, on the other hand, have given up a whopping 5.5 yards per carry, which is a half yard worse than the second-worst defense. To go along with that debacle, the Panthers haven’t been very good against the pass either, ranking 2oth in that department.

That does not give one a lot of confidence in their chances to stop the Packers offense, which should be playing with confidence after the comeback win in Miami. The Packers and Aaron Rodgers have a good opportunity here to keep their momentum going. They should be able to have some success on the ground and if the Panthers struggle at all against Eddie Lacy and James Starks, then they will have virtually no chance of stopping Rodgers.

Obviously, the Panthers’ best chance is to get the running game going and keep the Packers offense off the field. The problem with that is the Panthers are 28th in the league at running with the football and their best running back, DeAngelo Williams is not likely to play. Cam Newton has been pretty sharp this season and obviously the Packers are more vulnerable than their No. 5 ranking against the pass would indicate with both starting corners unlikely to play.

Still, Newton has a better chance of beating the Packers with his legs than with his arm. Casey Hayward and Davon House are good players who are getting their chance to shine at home. The guy who plays better is the likely replacement for Tramon Williams next season. Plus, when you add in the Packers’ ability to get after the quarterback, I still like the Packers’ chances of defending the pass.

I think the Packers will play their base 3-4 in order to stop the read-option and I believe they will be mostly successful. I believe the Packers will pressure Newton and I think Clay Matthews will have a good game. The Panthers can make this a tough game by having a quick start like the Jets, by rediscovering their defense and by Newton having a great game. But based off past performance so far this season, I like the Packers to cover.

I also think that Aaron Rodgers will continue his play from last game.

Big game for the Packers. I’d feel much better going into New Orleans next week at 5-2 than at 4-3. If the Packers can get to their bye no worse than 5-3, then they will be in great shape with five home games and three winnable road games after the bye.

Andrew (5-1) — The Carolina Panthers come into this game as the same 7-point underdogs they were on the road last Sunday in Cincinnati. Last week, Carolina was fortunate to come away with a tie when Bengals veteran kicker Mike Nugent missed a chip shot at the end of the overtime period. Not only was this the first (and likely only) tie of the NFL season, it was also the highest-scoring tie in NFL history. That’s an honor that’s reminiscent of “Major League” when the guy comes up to Ricky Vaughn in the bar and says, “I saw your record on the news. You made their Hall of Shame.”

Anywho… the Panthers go on the road again this week to Lambeau Field where they run into the heating-up Packers, currently enjoying a three game winning streak and four of their last five. On the surface, this doesn’t look to be that crucial of a game for Green Bay, but as touchdown favorites at home I view this game as a must-win.

I know coaches and teams claim to not get ahead of themselves and take it game by game and week by week, but quite honestly I find that as believable as Aaron Rodgers not caring what useless bag of wind Skip Bayless has to say about him. I think teams do look ahead and you know damn well the players do. This is a situation that would behoove the Packers to do just that and see how quickly the comfortable 4-2 position they are in right now could turn into 4-6 if they don’t keep the momentum and take care of business.

If the Packers decide to sleep through the game this Sunday and get punked by the Panthers, it would then be on the road to play the currently struggling New Orleans Saints at their place. However if the Saints pull their heads from their asses they could do the Packers a big favor on Sunday by knocking off the Lions in Detroit. Regardless of what happens, the Packers will be facing a very pumped up 3-3 Saints team hellbent on turning the corner, or a 2-4 team desperately looking to save its season. Then after the bye week the Packers play at home against what will likely be a very pissed off Chicago Bears team and then follow that up with a home game versus the Philadelphia Eagles… another tough matchup.

So make no mistake about it, this just might be the biggest game of the year for the Packers to determine their fate moving forward, because this should be an automatic win. But by no means has this team set the world on fire or demonstrated the ability to be dominant over an extended period of time and the Carolina Panthers are led by a freak of nature in Cam Newton, who will almost certainly give the Packers fits. I don’t care who’s carrying the ball from the running back position…. Fozzy Whittaker… Fozzy Bear… it could be anyone based upon how much difficulty the Packers have in stopping the read option and you know the focus will be on Newton. I believe whoever gets the bulk of the carries for the Panthers will be successful.

It used to be a foregone conclusion that the Packers would win at Lambeau Field. Unfortunately, those days are gone. The Lambeau Field mystique is dead. Instead of being a terrifying place to play where no road team comes out a winner, it is probably greeted more with open arms and viewed as a tremendous opportunity. And that’s what the Carolina Panthers have come Sunday — a tremendous opportunity to win at Lambeau Field and catch the Green Bay Packers feeling a little too good about themselves.

At the end of the day, I sense a shootout. Although I do have confidence in both Davon House and Casey Hayward, I believe Cam Newton will use an array of pump fakes mixed in with his numerous quarterback scrambles and he will have success in exposing them on occasion. I think the Packers offense will get theirs and I feel like they’ll need to put up 30-plus in order to bring this one home.

I still don’t feel like I know anything about these Green Bay Packers. I feel like on any given week they could totally dominate anyone or completely shit the bed and lose to anyone in the league.

I hear Aaron Rodgers getting all cocky (and defensive at the same time) and it just reminds that, hey, Aaron, you really haven’t played all that great this year. The touchdown numbers are nice. The TD-to-interception ratio is great. That game-winning drive last week was pretty swell (with extra special thanks to T.J. Lang for picking up that fumble that you lost).

You really haven’t given me a game that’s blown me away this year. One where I’m like, yeah, he’s clearly the best player in the entire NFL. Maybe this is the week though.

The Carolina Panthers defense has been garbage this year. I know, those assholes are on one of my fantasy teams. Some people claim they miss defensive end Greg Hardy, who’s been inactive since he was accused of domestic violence. Maybe. Whatever it is, that unit has gone from being one of the best in the league in 2013, to being one of the worst in 2014.

So I imagine the Packers offense will be able to do pretty much whatever it wants on Sunday, providing they have a game plan that’s worth a shit. And as you know, that’s certainly no given.

The other big difference for the Panthers this year versus last, when they won the NFC South, is the passing game. In the offseason, the Panthers basically rid themselves of ALL of their receivers. The most prominent names are Steve Smith and Brandon LaFell, both of whom are still playing some pretty good ball for other teams.

So who does Cam Newton have to throw the ball to now?

How about rookie Kelvin Benjamin and old man Jerricho Cotchery? Benjamin has actually been pretty impressive. He has over 400 receiving yards this season, but he’s listed as questionable for Sunday’s game.

Does that mean the Panthers aren’t going to be able to throw? Doubt it. They’re 12th in the NFL in passing offense, even with this motley crew. A big part of that is because of tight end Greg Olsen, who’s a goddam boss.

If I were the jarhead that coaches the Panthers, I’d try to get Olsen matched up on some asshat like A.J. Hawk or Brad Jones. That’s got career day written all over it for sure.

I’d also run the read option a lot. Right at Clay Matthews, because that fucker 1. doesn’t understand outside contain and, 2. can’t figure out whether to bring down the QB or the back on read-option plays.

What I’m getting at here is, I expect a game very similar to the one Carolina played at Cincinnati last week. Lots of points on the board because, hey, defense sucks and we’re both going to refuse to play any!

What I don’t see is the Packers rolling over these clowns. If the game were in Carolina, I’d take the Panthers.

Because it’s in Green Bay, I hesitantly take the Packers.