No One Knew Aaron Rodgers’ Fake Spike was Coming 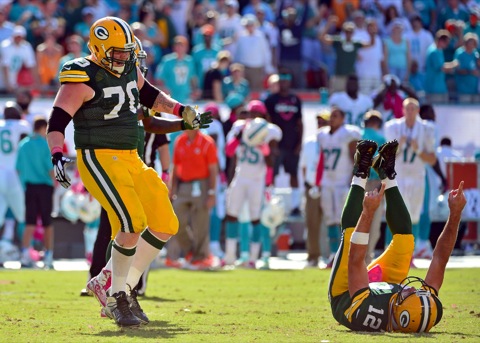 The legendary fake spike. Dan Marino did it to the New York Jets 20 years ago. Aaron Rodgers did it to Marino’s team, the Miami Dolphins, yesterday.

The difference between the two is that Marino’s was a touchdown. Rodgers’ just led to a touchdown.

Nonetheless, Rodgers made a great play. Probably even more so when you consider no one knew it was coming. Not even the guy who caught it, rookie receiver Davante Adams.

“It’s one of those things that you don’t really tell anybody what’s going on,” Rodgers said. “You’re just yelling ‘clock’ and signaling ‘clock,’ and then right before I snapped it, I looked out to the right and they were way off outside. So I just kind of faked it and moved. Davante wasn’t looking at me initially, but after he saw me, probably moving, he looked and I threw it.”

Adams took the pass for 12 yards and, more importantly, got the hell out of bounds to stop the clock. That gave the Packers another play at the Dolphins’ 4 with six seconds remaining. That, of course, was Andrew Quarless’ touchdown.

After the game, Adams talked about non-verbal communication, but it was pretty clear he had no idea the ball was coming until it did. The Packers have never practiced such a play.

It’s just the genius of Aaron Rodgers and great alertness by Davante Adams.