Has anyone seen Clay Matthews lately? You know, other than in commercials?

The supposed lynchpin, leader, chief playmaker, whatever of the Green Bay Packers defense has been MIA this season. Through six games, Matthews has only 14 tackles, one sack, one forced fumble and an interception.

This comes in a season when, for the first time in his career, Matthews has a legitimate stud on the other side of the defense in the form of Julius Peppers. So, needless to say, your production should increase, not decrease.

And yet, Matthews has the lowest tackle and sack total through the first six games in his career, this season.

Even last year, when Matthews only played in four of the Packers’ first six games, he had 18 tackles and three sacks. In two fewer games! Minus Julius Peppers!

For starters, we’ve never seen Matthews play as badly as he is this year, even when he was a rookie. Not only is he not making plays, he’s making the type of idiotic mistakes you’d expect from a rookie (or Brad Jones).

Frankly, the only times we’ve noticed Clay Matthews this year is when he’s been directly responsible for giving up a long run. Matthews has no concept of outside contain, you see.

Basically, if you’re an opposing offense, just run outside the tackle to Matthews’ side of the field. Matthews will overaggressively crash into the middle and your runner will have a wide-open side of the field to run on. Easy 20 yards, at least!

Matthews’ play has been so lackluster that one of the local hacks finally asked about it yesterday. To which Buffoon gave the usual stock answer about the player grading out just fine on film.

Did you know every player grades out just fine on film under Mike McCarthy? True story.

But despite Buffoon’s insistence that he’s “comfortable” with Matthews’ play, we’re not. This clown makes over $13 million a year, on average. He’s the highest-paid outside linebacker in the NFL.

We’re not really here to make excuses for Mathews, but if you’re looking for a source of his ills, there are some potential culprits.

First, there’s whatever injury is bothering him now. Earlier in the season, Matthews suffered a groin injury. He played the next week, but obviously wasn’t at full strength. That doesn’t appear to be an issue anymore, but who knows?

James Jones played with broken ribs last year and no one knew. Tramon Williams has played (very poorly, it should be noted) with a substantial shoulder injury. It’s happened in the past where guys are on the field when they probably shouldn’t be.

Is it happening with Matthews? We have no idea, but we incessantly bitch about him not being able to stay healthy, so maybe he’s taken notice and decided to play through some pain.

On a side note, if you had the over on what game Matthews would suffer a hamstring pull this season, you win. The line was set at week 6.

Second, there’s the scheme itself. Buffoon promised us he was going to force Dom Capers to adapt his scheme to the personnel rather than trying to do things the other way around, this year.

The Packers have more 4-3 personnel than they do 3-4 personnel, so they’ve been running their share of 4-3. Matthews has even lined up in the middle at times. It’s entirely possible Matthews isn’t comfortable with his evolving role.

Frankly, we don’t give a shit. Go out and play ball and earn that check!

On the other hand, it could also be that Dom doesn’t quite know how to utilize Matthews best in this hybrid defense.

Of course, if that’s the case, then we’re finally sold on the Packers needing a new defensive coordinator.

Inability to adapt isn’t an acceptable excuse from either party.

Third, maybe that beard is slowing him down.

Seriously bro, you are not a lumberjack, survivalist or Brian Wilson. Groom yourself! You weren’t playing this shitty when you were clean-shaven.

Ironically, Matthews does/did have an endorsement deal with Gillette. Perhaps this is the advertising gods way of punishing him for endorsing a razor and not using one. 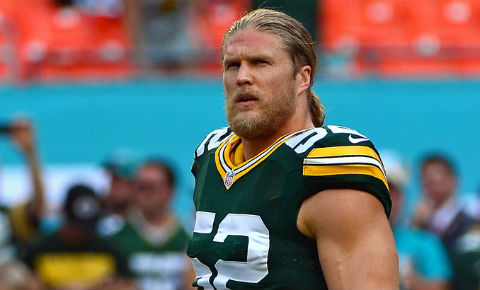