Here’s Where a Chicago Bears Player Tells the Fans Off

Chicago Bears fans… well, they’re not Minnesota Vikings fans. That’s pretty much the one thing they have going for them.

Well, after the Bears managed to lose to the Carolina Panthers yesterday, some Bears fans started to jump off this year’s Super Bowl bandwagon a little earlier than normal.

And that didn’t sit well with defensive end Lamarr Houston. So he told them about it. 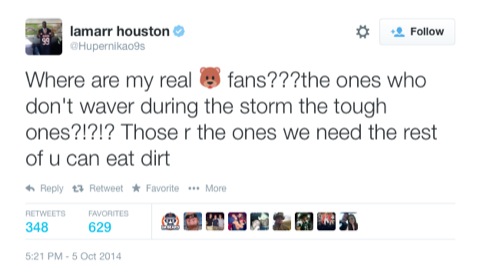 In Houston’s defense, he was a free agent signee in the offseason, so he doesn’t yet know how it works in Chicago. He used to play for the Raiders, where… well, let’s not even talk about the imbeciles who cheer for the Raiders.

So the Bears are now 2-3, which is really fine because they play in the NFC North, where the Green Bay Packers don’t start playing until midseason and the Detroit Lions refuse to win the division at all costs.

In other words, the Bears are still in the mix.

However, it doesn’t really help when your quarterback, the one, the only, the legend… Cutty! throws two picks every game.