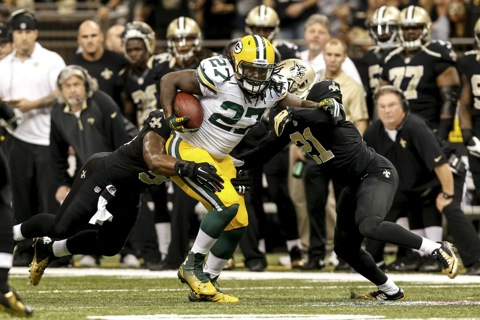 Normally, we’d be like, oh well. The Packers lost to the New Orleans Saints on the road because of course they did.

But you’re kidding yourself if you think this New Orleans team is very good. They’re Drew Brees and a bunch of bozos.

And we’re the Green Bay Packers — makers of careers. Mark Ingram thanks you.

Here are five more thoughts about the game that we didn’t touch on last night.

Oh, Eddie!
Hey, hell of a game by one Easy Eddie Lacy. Hell of a game! Lacy had 182 total yards (59 rushing and 123 receiving). Every time I looked, I saw Lacy either trucking some asshat or making him look like a fool with that spin move. Lacy gained that 123 on eight receptions. He only carried the ball 13 times, which begs the question. Why? It’s obvious no one was stopping Lacy (expect when he ran behind Lane Taylor). Why not run him more and try to the keep the ball away from the Saints, who the Packers obviously couldn’t stop? Because Buffoon, that’s why.

Speaking of Buffoon…
You know, the Packers go on a little win streak and everyone starts lapping up whatever the organization, coaching staff and local media hacks serve up to them. Mike McCarthy is suddenly a genius and you best not ever criticize him! Yeah, I heard it and I decided to lay off a bit. Well, now those of you who chastised me for consistently referring to McCarthy as Buffoon can go straight down to Pound Town and fuck yourselves. Let’s run behind Lane Taylor on 4th and 1 in our own territory! Nothing can possibly go wrong here!

Just because the Packers consistently win, doesn’t mean Mike McCarthy is necessarily a great coach. Much of the time, they win despite his buffoonery. Remember that.

This is just amazing
As we pointed out yesterday, neither team punted in the game. If you’re thinking that just happened, you’re right. When the Packers faced the Bears earlier this season, neither team punted. Here’s what’s more amazing. There have been only three games in NFL history where neither team has punted. The Packers have now participated in two of them and they happened in the same season. That’s probably some NFL history you and your shitty defense don’t want to be part of.

The formula for success is clear
The Packers have managed to string some wins together despite being totally awful at stopping the run. Not a big surprise they couldn’t stop the Saints mediocre-at-best rushing attack on Sunday. What they did in those wins that they didn’t do on Sunday was play the pass well and not turn the ball over. Against the Saints, the Packers did none of these things. They were just as awful at defending the pass as they were at defending the run AND they lost the turnover battle 4-1. We’re pretty certain the Packers aren’t going to suddenly be able to stop the run later this season, so they have to play well in those other two areas. We’re not terribly concerned about turnovers because Aaron Rodgers isn’t going to have too many two-interception games. We’re also not terribly concerned about pass defense because safety Morgan Burnett and cornerback Sam Shields will hopefully be back after the bye. Those two guys were missed on Sunday. It seems like it’s a different defense with Burnett on the field. We’re not quite sure how we got to that point, but Burnett’s absence has shown us just how valuable he is this season.

That being said, we’re pretty certain Sunday’s turd was in no way indicative of how the Packers will play the rest of the year.

So Sam Barrington is the answer?
Barrington started his second game in a row at inside linebacker in place of Jamari Lattimore. He had seven tackles compared with Lattimore’s two and by our assessment, got the majority of the snaps. Now, we’re not going to suggest that it was Barrington’s fault that a joker like Mark Ingram had a career day, but we really don’t know. What we do know is we certainly didn’t see Barrington make any plays, which is something we’ve grown accustomed to Lattimore doing.

So is Sam Barrington really the best guy to start next to A.J. Hawk? We don’t have a definitive answer, but we’re leaning toward no.