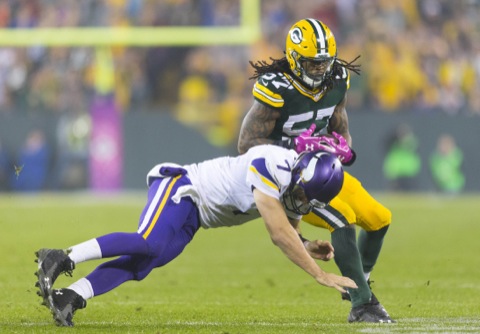 Hahahahahahaha! The Minnesota Vikings! Destroyed by the Green Bay Packers!

Sometimes things work out exactly how they’re supposed to and good triumphs over evil.

And yes, we’re way later that usual with this because the two-bit operation that is United Airlines not only can’t get a flight out on time, they also have no wifi on their shitty planes. United, you truly are the Minnesota Vikings of airlines.

Anyway, here are five more thoughts on that beat down.

A sigh of relief
Brad Jones was able to play Thursday night for the first time since week 1. We half expected Buffoon to throw him back into the starting lineup because these are the kinds of things Buffoon does. Thank god that did not happen. Jamari Lattimore remained the starter at inside linebacker and deservedly so. He turned in five tackles and an interception. My god, what was that?! A Green Bay Packers inside linebacker making a play?! Amazing! You know we wouldn’t be saying that if Brad Jones were in the game.

If only the Packers played the Vikings every week
Yeah, they’d be 16-0, but defensive tackle Letroy Guion would also, apparently, be tearing it up every week. Guion had his best game as a Packer, which was also his only good game as a Packer. Why? Because the Vikings cut him in the offseason, so he decided he was going to show those creeps what’s what. Four tackles and 1.5 sacks is what’s what. If only that sort of production would continue.

This pass rush looks REALLY good
The Packers have shown the ability to get to the quarterback this season. That hasn’t always translated into a lot of sacks, but they’ve consistently applied pressure, which is something they rarely did last season. On Thursday, that pressure translated into six sacks. That’s impressive by itself, but more so when you consider that the Vikings have a pretty solid offensive line. In fact, I’d argue that’s one of their strengths. The Packers’ run defense is still suspect, but if they can bring pressure like this all season, it might not matter.

Okay, fine, Morgan Burnett
We’re still pretty sure Morgan Burnett sucks, but hey, the sun shines on a dog’s ass every once in a while. On Thursday, it shined on Morgan Burnett, who easily had his best game since at least 2012. Burnett had a team-high 11 tackles and a forced fumble. That’s a hell of a line for anyone, but it’s eye-popping for Morgan Burnett. Did this clown find his mojo or something? It’s going to take more than one game to convince us, but nice performance anyway, jerk!

The line…
I know we’re all excited about Eddie Lacy’s return to form on Thursday and he did run better than he has. Less dicking around, more hitting the hole. That being said, the offensive line actually created some holes for Lacy to hit for a change. In previous weeks, there would be at least a few plays each game where Lacy would get blown up in the backfield because some jackwagon offensive lineman got pushed five yards backwards right at the snap. It’s hard to find a running lane when someone’s fat ass is in your face. Overall, this was the offensive line’s best game.

Previous Article
Eaaaaaaaaaaaaaasy!
Next Article
This is a Fuckin’ Rivalry!