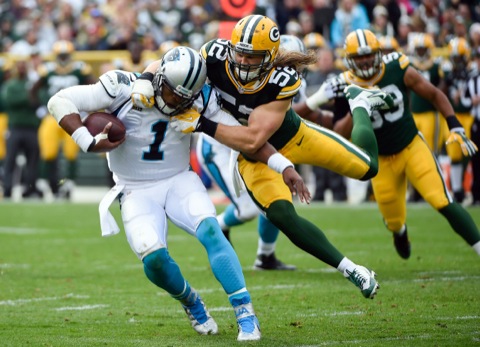 That wasn’t much of a game. The Green Bay Packers were dominant in Sunday’s 38-17 win over the Carolina Panthers.

A dominant performance by a Buffoon-coached team…

We are just beside ourselves. But hey, the sun shines on a dog’s ass every now and again.

So here are five more thoughts on the win.

It looks like they finally got the hint on Brad Jones
Did you notice Brad Jones out there mucking up the works as usual on Sunday? He did play some defensive snaps, but no meaningful snaps that we noticed. Jamari Lattimore — thank the football gods — returned from his neck injury to start alongside A.J. Hawk on Sunday. But second-year player Sam Barrington got snaps ahead of Jones. Neither Lattimore (3 tackles) or Barrington (2 tackles) was spectacular, but they didn’t have to be. As long as neither of them are Brad Jones, that’s good enough for us.

Hey, Brandon Bostick!
Well, Buffoon & Co. finally decided to let Brandon Bostick play some tight end. Aaron Rodgers even threw him the ball one time. For two yards. Wooooo! That’s the same number of catches that rookie Richard Rodgers had and one more yard than he had. God’s Gifts, who was supposed to break out this week after catching the winning touchdown last week, also only had one catch. His went for nine yards. The Packers’ tight ends are kind of a bag of shit this year, especially Rodgers. Maybe throw the ball to Bostick a little more often now that you’ve popped the cherry there, huh? He’s the only unknown at this point. The other guys are obviously mediocre at best, so what’s there to lose by trying to involve Bostick? Nothing.

What a terrible game plan…
Usually we’re talking about Buffoon’s shitty game plan in this space. We’ve now seen a shittier one. It was the one drawn up that clown show that coaches Carolina. So let me get this straight. You know the Packers are vulnerable to the read option and your quarterback is Cam Newton, yet you run, what? Three read option plays all day? Your tight end is Greg Olsen and he’s probably going to be covered by A.J. Hawk, but you don’t get him involved until the second half? The Packers are awful in run defense period and you’ve got Jonathan Stewart back for the first time in weeks, but you don’t try to establish a running game? I think Ron Rivera got a hold of one of Buffoon’s old game plans and decided to just use that on Sunday. There’s really no other explanation for such buffoonery.

Clay Matthews heard ya
We mentioned it yesterday, but it bears mentioning again. Clay Matthews responded to all the chatter about how he’s playing like shit with probably his best game of the season. As we’ve come to expect this season, Matthews didn’t have a great line in the box score (2 tackles, .5 sacks), but he did wreak some havoc. His first tackle on the day was one where he dropped Stewart in the backfield. He was also directly responsible for at least one of Julius Peppers’ 1.5 sacks. Matthews’ initial pressure on that play forced Newton to step up in the pocket right into Peppers. It was pretty much a continuous dose of fucking shit up from Matthews. It’s just a good thing the Panthers didn’t run any read option directly at him. Anyway, Matthews apparently only shows up for games now when you ride him all week, so keep riding him.

There are times…
When I think Ha Ha Clinton-Dix is the best defensive player on the field. Clinton-Dix had a team-leading eight tackles on Sunday, which has pretty much become the norm. That name has become a fixture at or near the top of the tackles column in the box score in recent weeks. I’m not sure I’d call him a game-changer yet, but Clinton-Dix has certainly improved the Packers defense. I would personally like to punch Big Ted in the face for trying to pawn off M.D. Jennings on us for so many years. Now that we’ve witnessed solid safety play first hand, it’s pretty clear that was a total dick move.