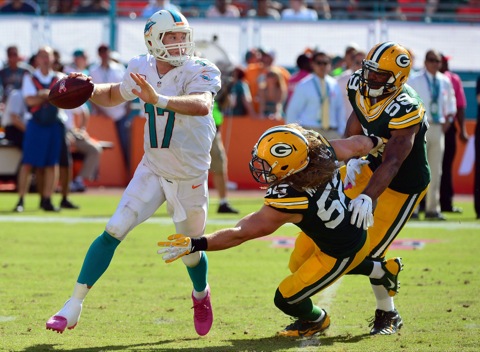 The Green Bay Packers moved to 4-2 after a somewhat improbable last-minute comeback win against the Miami Dolphins on Sunday.

The win is a feather in the cap of Aaron Rodgers, who hit Andrew Quarless for the winning score. But lest you forget, such a drive is not the norm with Rodgers.

This was only the seventh fourth-quarter comeback in Rodgers’ career. Brett Favre had 30 of those and shitbirds like Kordell Stewart (9), Matt Cassel (8), Erik Kramer (11) and Jon Kitna (18), along with about 800 other guys have more.

So before you go drinking the Kool Aid that Rodgers is the most clutch quarterback to ever live, remember that Tony Romo has 21 fourth-quarter comebacks.

Now, on with the show.

Oh, Jamari…
Inside linebacker Jamari Lattimore had a pretty shit day. First, he missed a tackle on a running back in the flat. That should have been a short gain, but instead was a first down. Then he appeared to give no fucks about blocking on Tim Masthay’s first punt, which was blocked by his man, Jonathan Freeny. Then it got worse, for both Lattimore and the Packers. Lattimore left with a neck injury at some point and in came our recurring nightmare, Brad Jones. It’s as if the Packers immediately had a whole new defense, which was much, much worse than the one they started the game with. It’s pretty rare that one guy can take a whole unit’s play down several levels, but Jones has earned the distinction of being that guy. One, we will take Lattimore’s occasional lapses over Jones’ awful play any day. Two, if Lattimore misses any time, which we hope he doesn’t, the Packers would obviously be better served playing Sam Barrington instead of Jones.

You know we wanted to bitch about the game plan, so here goes…
Alright, so the running game is back to being crap for the most part. Not totally unexpected. The Packers offensive line just isn’t any good at run blocking. David Bakhtiari, as good as he is in pass protection, is equally bad in run blocking. Bryan Bulaga is a downgrade from Don Barclay. Corey Linsley is a rookie and sometimes still plays like one. That’s not what we’re confused about though. The Packers still ran and were occasionally mediocre at it instead of just plain old bad. And they kept doing it. What makes zero sense — and we’re not sure if it’s Aaron Rodgers or Mike McCarthy — is why the Packers refuse to work the middle of the field. It’s as if that area of the field has an invisible wall constructed around it every time the Packers get the ball.

Throw to the middle? Can’t! There’s a wall!

Seriously, how many times did you see the Packers utilize that part of the field in the passing game on Sunday? Once? Twice? That’s where the Packers should have an advantage, especially if teams are sitting back in cover 2, which has pretty much been the case for the last three years.

You probably also noticed the Dolphins were bringing blitzes to get pressure on Rodgers on Sunday. Those were primarily coming up the middle, which would give the Packers one-on-one coverage, most likely with a safety, if they went to the middle.

Yet, despite that, the Packers insist on throwing outside. This game wouldn’t have required a last-second comeback had the Packers had a more varied plan of attack.

Brad Jones isn’t the only guy who doesn’t deserve a paycheck this week
First, Richard Rodgers. Take this shithead and put him on the bench and leave him on the bench. He’s a liability. The only reason he should be on the field is if it’s a passing play and you’re throwing him the ball. Andrew Quarless is by far the superior tight end right now. And Brandon Bostick, can we see him already? Rodgers offers nothing right now.

Second, I’m sure you noticed Bryan Bulaga getting beaten like a rented mule on Sunday. Yeah, he was facing Cameron Wake, who’s a pretty good pass rusher, but this is why you spend a first-round pick on a tackle. So you don’t have to worry about guys like Cameron Wake. If anybody tells me Bryan Bulaga is a top-tier tackle, I’m going to punch them in the mouth. It is infinitely clear to me that the Packers line was better when Don Barclay was at right tackle and Bryan Bulaga was off giving wedgies to school children.

Clay who?
Let’s get this out of the way. Julius Peppers is the best player on the Packers defense and the Chicago Bears are idiots. That guy is straight up disruptive. Even when he isn’t making plays that show up on the stat sheet, he’s fucking shit up for the opposing offense. Meanwhile, the guy Peppers was supposed to free up and/or provide support for, Clay Matthews, is absolutely nonexistent.

Has Matthews made one play this year? Oh, right. That interception where Tramon made the play and Matthews just happened to be standing in the exact perfect spot. So he didn’t really make that play either, he was just the beneficiary of someone else making a play…

Matthews did not even have a tackle on Sunday. On the season, he has 14 tackles, one sack, one forced fumble and that interception. We supposed that’s okay if you’re like, Brian Robison, but not for a guy making the money that Clay Matthews is making.

So, when are you going to start playing this year, Clay?

Safeties = boss!
Alright, we’re back on the Morgan Burnett bandwagon. He’s playing the best football of his career right now and it’s about damn time. Ha Ha Clinton-Dix could be the reason. Talk about upgrading a position. Clinton-Dix versus the turds the Packers tried to pass off as safeties last season is like the difference between night and day.

Clinton-Dix is the real deal. He can support the run and play the pass, he’s not afraid to stick his nose in and he allows Burnett to do whatever it is Burnett does.

This position has gone from weakness to strength.