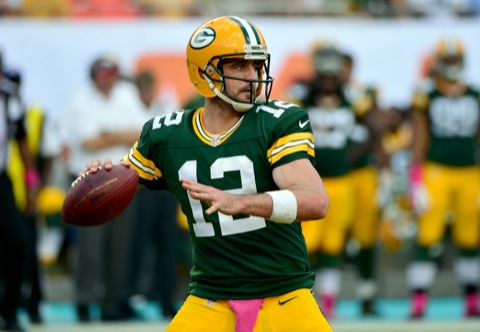 Aaron Rodgers is an overly-sensistive tit. That has long been established and it’s obviously never going to change.

“I think as far as the criticism goes, I think that’s where some of the comedy comes in to me,” Rodgers said. “You have to find humor in it. Because I get criticized for holding the ball too long and not taking risks, right? So then there’s the risk vs. interception. Then I fake a spike and throw it to Davante and I get criticized for taking risks. So that’s why I said earlier that critics are always going to win as far as getting their criticism out there, because they can make up new things to criticize whenever they want and use stats or feelings or whatever to fit the specific thing they are criticizing. I’m going to play the way I play. It’s been pretty successful around here. I’m going to hold onto the ball when I feel like I can, and get out when I feel like I can as well. But I don’t worry too much about the critics. It’s talking out of both sides of their mouth. And that’s why the stuff doesn’t bother me.”

I mean, this is a perfect example of Aaron getting all defensive, as he is wont to do. First of all, you do hold the ball too fucking long sometimes. Just admit it already and then we’ll move on. Or, stop holding the ball so damn long.

It’s one of the few faults in your game. But don’t take that to heart and correct it, whatever you do! Just get all pouty about it!

As far as taking risks goes, who’s criticizing Rodgers for not taking risks? I think he made that up just so he could pretend to be butt hurt.

And as far as criticizing the fake spike play, Rodgers can only be talking about Skip Bayless, who is as useless as the piece of toilet paper I used to wipe my ass this morning. Why even bother giving an credence to that moron?

Because that’s what Aaron Rodgers does. Throws touchdown passes and gets bent out of shape about any sort of criticism of his game.