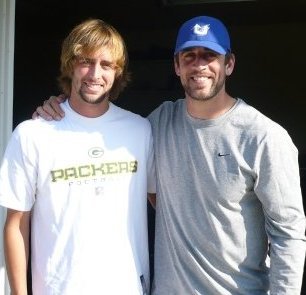 His name is Eric Mueller. Or is it Robert Paulson? No, no, it’s Eric Mueller and he looks like Aaron Rodgers.

Mueller hit us up after the latest hullaballoo surrounding British comedian Tom Wrigglesworth, who looks a little like Aaron Rodgers. Wrigglesworth shot a piece with NFL Films, where he came to Green Bay to meet Rodgers.

And Mueller was pissed! Well, maybe not pissed, but he probably felt kind of slighted because he clearly looks more like Rodgers than Wrigglesworth does.

I mean, right height, pretty much the exact same face, same stubble. If this kid isn’t showing up at bars and telling broads he’s Aaron Rodgers, then there’s something wrong. He probably slays all the pussy in Green Bay using that line.

But he’s not a British comedian, so nobody notices how much he looks like Aaron Rodgers, except for drunk Green Bay broads and now, us.

Mueller is from Sheboygan Falls, Wisconsin and he now lives in Point. He did admit to me that looking like Rodgers helps him pick up women. People have also asked for his autograph.

Here’s a better story though.

Me: So how did you get that shot with Rodgers?

Him: I met a friend in college whose mom happened to live right next door to Rodgers in Suamico, so one day I went up with him to his mom’s place and just waited for Rodgers to get home. Then we just walked over and asked if he’d take a pic.

Yes, he got that pic by sitting outside the dude’s house until he came home and then confronting him, which is also known as stalking.

That’s okay though. When you look exactly like someone else, you should stalk them, especially if they are someone famous. If you get caught and they don’t like it, you can just try to mimic their movements and they’ll be confused into thinking they’re staring into a mirror.

Anyway, later on, Mueller had Rodgers autograph the photo. It says: “You’re a good looking dude, no homo.”