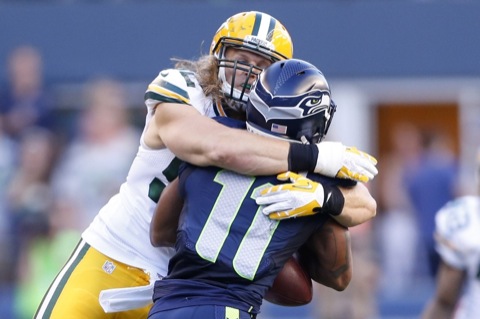 Yes, the Green Bay Packers have that positive going into week 2 of the NFL season. Sure, they’re an embarrassment. They have all the same problems they’ve had the past several seasons. They refuse to take any of their underachievers out of the lineup. However, at least Clay Matthews still has a thumb.

That’s what we got out of this piece (of crap) from Rob Demovsky, who has a face for radio and a voice for print.

Let’s be serious for a moment, though. Matthews broke his thumb twice last year. The same thumb. It cost him six games, including the Packers’ annual playoff loss.

So the fact that he made it through the first game of this season without the damn thing falling off, well, that’s obviously a HUGE victory!

“That is one thing where I can put a little smile on knowing I got a little personal victory in regards to going out and doing everything I wanted to do with no setbacks,” Matthews said. “I think that was huge for my psyche. I’m happy about that.”

And if Clay is happy, then we are happy.

The Packers’ shitty defense is considerably less shitty with Matthews on the field.

Just think of what we’d be watching if Matthews were injured again. A no-pass-rush, no-tackling amoeba of flailing arms and legs. You can say, yeah, well, Julius Peppers, but let’s not kid ourselves. If Matthews is out, Peppers is getting doubled and then he’s no doubt shutting it down.

So the thumb is good. Now the only question is when the annual Clay Matthews Hamstring Injury makes its appearance. We’re putting the over/under at week 5.

Of Course Colt Lyerla Got Arrested

Oh, So the Packers Run a 4-3 Defense and it Sucks?

Oh, So the Packers Run a 4-3 Defense and it Sucks?