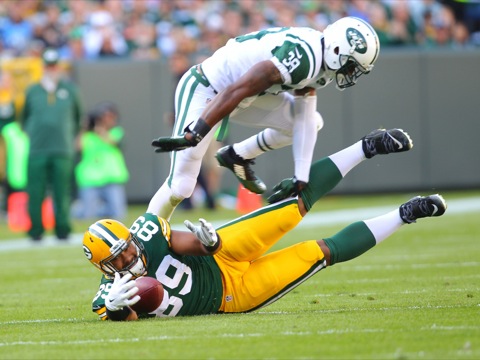 There’s plenty of blame to go around in Green Bay. From Captain Pussy Whipped to Buffoon to Eazy E to the floppy-shoe-wearing clowns blocking for him. No one has singled out the Green Bay Packers tight ends yet though.

Until today, that is!

Actually, no. To hell with that. The Packers offensive woes start with Buffoon’s game plan and Captain Pussy Whipped execution or lack thereof. Then they trickle down to running backs, offensive linemen, tight ends, etc.

They certainly do not start with the tight end position.

That being said, the Packers tight ends fucking suck.

Richard Rodgers — BIG surprise! — isn’t living up to the preseason hype. We’re not the kind of people who say we told you so, but… wait… yes we are those kind of people.

WE FUCKING TOLD YOU SO!

Do you know how many receptions Rodgers has this year? Not a goddam one and he’s started all three games!

Do you know why he isn’t catching the ball? Well, for one, he has only one target. But that’s probably because Andrew Quarless is playing more snaps than he is.

The reason Rodgers isn’t playing all that much is because he can’t block for shit, which we also told you was going to be the case.

Then there’s Brandon Bostick, who was injured in the preseason, but has been healthy the past two weeks. He hasn’t even played a snap on offense. Why?

Well, you’d have to ask Buffoon about that. It certainly isn’t because any of the Packers other tight ends are any good. The master of the in-game adjustment apparently can’t be bothered to divert from his normal substitution patterns.

That brings us back to Quarless. He’s gotten the most action and has the most production — eight catches for 77 yards and a touchdown.

Like Rodgers, Quarless isn’t a very good blocker, although he isn’t nearly as bad as the rookie. Still, there are people blaming Quarless for the ineffectiveness of the running game.

Remember, Quarless was the Packers starting tight end for most of 2013 and the running game worked just fine. So what’s changed?

What the Packers have completely failed to do is adjust to their personnel at this position. And I know this is a foreign concept in Green Bay.

Quarless is the best all-around option you have, so he’s the starter for now.

Unless… Bostick shows he can be a halfway decent blocker. We know he’s a good pass catcher, but we have no idea if he can function in the running game because he hasn’t been on the field. So put the guy on the field already!

Rodgers needs to get shelved. The fact that anyone thought a guy who played receiver in college last year could come in and be an effective NFL tight end immediately just shows you how stupid some people are. As we’ve pointed out numerous times now, Jermichael Finley, who also was unpolished as a blocker coming out, only had six receptions his entire rookie season. That’s because the Packers didn’t try to force a guy they knew couldn’t block onto the field.

If Rodgers is going to play, then play him situationally — when you’re clearly throwing the ball. And throw him the damn ball and see what he can do.

Here’s another thing that makes no sense. People say Rodgers isn’t getting the ball because Aaron Rodgers doesn’t trust him.

So you’re telling me Aaron threw the ball to Richard all training camp and preseason and now that the regular season has started there’s suddenly no trust?

Richard Rodgers isn’t getting the ball because he isn’t on the field that often and because Aaron Rodgers is playing like shit.

Previous Article
Jay Cutler was in Full Cutty! Mode Last Night
Next Article
Nothing to Worry About, According to Aaron Rodgers