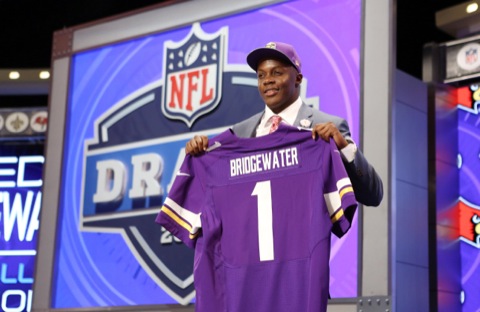 It’s safe to say the Minnesota Vikings are in full rebuilding mode. After losing franchise running back Adrian Peterson for the very Vikings’ reason of being a scumbag, the team has now officially entered the Teddy Bridgewater era.

They put starting quarterback Matt Cassel on injured reserve. Cassel broke several bones in his foot against the Saints on Sunday.

Bridgewater, one of the Vikings’ first-round picks this year, relieved Cassel on Sunday and was 12-of-20 for 150 yards, no touchdowns and no picks. That gave him a rating of 83.3, which is pretty middle of the road and also pretty much perfect for a Vikings quarterback.

This also means — at least we assume — that we’re really only one injury away from resuming the total awesomeness that is/was the Christian Ponder era! Remember how great that former Vikings’ first-round pick was? We know you do!

Teddy — and I’ll never get why a grown-ass man would ever want to go by Teddy instead of just Ted — is sure to follow in that same glorious path, resulting in multiple Vikings Super Bowls!

Go ahead, ask any Vikings fan…

On a more realistic note, at least we now know the Green Bay Packers won’t be finishing last in the NFC North this year.