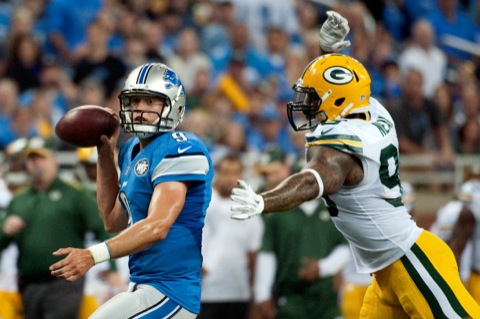 1. Micah Hyde had a great seat
If there is one lasting impression I’m left with in yesterday’s game, it is the sight of Micah Hyde standing flat-footed as Reggie Bush cruised to his game-clinching score. Although the defense was clearly not the problem yesterday and Hyde might be getting unfairly singled out in this case, I think his effort on this play is representative of what is wrong with this team. Hyde stood and watched as Reggie Bush got outside before making any kind of move and by that time it was way too late. Prior to the snap, all three linebackers lined up inside the tackles with really no semblance of a defense on the edges. As the play starts, Bush clearly has the ball in the backfield, the middle is bottled up and Hyde stands and does absolutely nothing. If he uses his common sense and instincts maybe the Packers make a stop. With three linebackers lined up in the middle of the field in a formation clearly designed to stop the run, Hyde shouldn’t be waiting flat-footed for Bush to make it through that logjam of shit up the middle. If Bush makes it through that, so be it. Hyde should be shooting around the outside of the offensive line into the backfield where Bush is likely to try and escape. Maybe it wasn’t his assignment, but I don’t really care. When the game is on the line and your team desperately needs a stop to get the offense back on the field, sometimes you have to take a chance to make a great play. Believe me, we’ll forgive you for trying to make a great play even if it results in a touchdown. What we won’t forgive is passive, weak-ass, defense that STILL leads to a touchdown. Make a play for crying out loud. Where are your instincts?

2. Gimme DuJuan! Dammit, DuJuan!
I asked for him… and I got him. I’m not really sure it was his fault, as the overall running game was for crap all game anyway, but my main man DuJuan Harris didn’t do himself any favors in his limited action. This doesn’t mean I’m off DuJuan’s bandwagon, but running backs with names other than Eddie Lacy need to be given the opportunity to carry the load when the game and action dictates. Yesterday, James Starks looked to be the man with the hot hand. In fact, one could argue Starks has had a hot hand since the beginning of last year. Eddie was the Rookie of the Year so I guess you have to ride him, but at what point are you willing to give another guy more reps?

3. Randy Cobb
Randall Cobb said he was embarrassed with the way he played? Oh, okay. He covered my thoughts then. I have nothing further, your honor. Moving on.

4. The Safety Dance
McCarthy’s call? Rodgers’ audible? If I was one guy I would blame the other because the call on the play that resulted in the safety was so bad. The Packers have now given up two safeties on the year. You know how many the rest of the NFL has had? Two less than that… ZERO. No one can say the Packers offense doesn’t lead the league in anything!

5. Befuddled McFuddy
Did you see Mike McCarthy whining to the ref after the Packers gave up that safety? I was screaming at the TV, “Dude! He was tackled five yards deep in the end zone! What can you possibly be bitching about!”

6. Wow, is this boring
Did anyone else find themselves utterly bored watching this game? The third quarter seemed to evaporate before my very eyes and I was shocked at the dearth of big plays… or even mildly interesting ones. Mike McCarthy runs a boring offense. Everyone is using the word stale to the point that stale has become stale. When something stale becomes stale, and that staler thing becomes stale, then what you have is the Green Bay Packers offense.

7. Mike Neal and bow down
Shawn called it in Total View last week that Mike Neal is a potential Pro Bowl player. Although he’s had chances for gaudier stats than he currently has amassed, Neal is around the ball and is getting after the quarterback on a regular basis. And with that linebacker that always gets hurt now sitting out again, he’ll be called upon even more. Rumor has it that Neal has a Total Packers article hanging in his locker entitled “Packers Select Someone You’ve Never Heard of in Second Round.” I think Total Packers and Monty deserve some credit for keeping Mike Neal motivated.

8. You named your cat Julius!
In 2010, the Packers defense made big plays all year and forced big turnovers when Green Bay needed them the most. But then again, they had an offense that was capable of taking advantage of such plays too. Julius Peppers did his part, playing the role of Superman on back-to-back plays. After not biting on a play-action toss, Peppers gave Stafford a nice “How do you do?” by shoving him to the ground like the fat kid he is. Then on the next play he followed it up with the hat trick of the sack, strip, fumble and recovery. Damn… that’s actually four things. The Grand Slam of pass rushing sack thingies!

9. Warm up Matt Flynn
It’ll never happen. That doesn’t mean it shouldn’t ever happen. Wake up, Aaron. I’ll cut you a little slack here, but quit talking about how you set the bar so high, quit yelling at your teammates and start at least pretending like you’re having fun out there. The guy looks miserable and he’s playing like he looks.

10. A bounce back team = poor leadership
A good bounce back team by definition is a team that struggles with consistency. Although history says the Packers will come back next week with their A-game, I think everyone is a little less certain about that happening than they were this week. Hopefully they can get it going in the right direction.