Packers Trounce Bears, All is Well 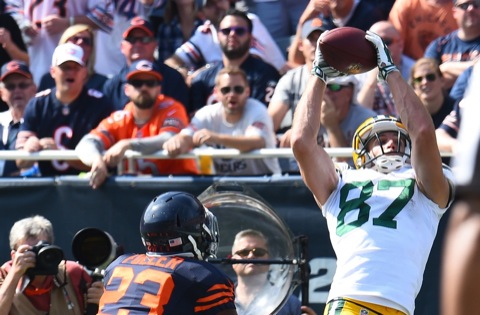 Well, everything returned to normal this week. The Green Bay Packers dominated offensively, their defense sucked and they beat the Chicago Bears anyway by a score of 38-17.

Aaron Rodgers looked like his old self for the first time this season, dialing up the Bears for 302 yards, four touchdowns and no interceptions.

Jordy still got his — 10 receptions, 108 yards, 2 touchdowns — but some other guys got in on the act too. Randall Cobb showed up for the first time this year, recording seven catches, 113 yards and 2 touchdowns. Richard Rodgers also had his first two catches of the season, which went for 52 yards.

Eddie Lacy, meanwhile, had another underwhelming effort with 48 yards on 17 carries. That’s a meager 2.8 yards per carry. Oddly, he’s the only running back who got any carries on Sunday.

Running game is broke. Don’t give the ball to anyone else.

This game basically turned at the end of the first half.

With the Packers ahead 21-17, the Bears drove to the Packers’ 1 and were unable to score before the half ended. From there on out, it was all Packers.

The Packers put up 17 in the second half, while the Bears produced two turnovers — both Jay Cutler interceptions.

The Packers’ defensive effort was reminiscent of 2011. They couldn’t stop the Bears, but they got enough turnovers to win the game.

Both picks, which came courtesy of Clay Matthews and Sam Shields, included long returns that put the offense in great position to score. And score they did, putting up 14 of those second-half points after the turnovers.

Despite that, it was pretty clear the defense couldn’t stop the Bears. In pretty much every way.

The Bears gained 235 rushing yards, 122 of which were Matt Forte’s. They also had no answer for tight end Martellus Bennett, who had nine receptions for 134 yards.

If it weren’t for the turnovers, this game would have been a shootout.

There were literally zero punts on the day. No one punted. Not once.

Thankfully, it never turned into a shootout. It was blowout, as it should be every time the Packers play the Bears.