Oh, So We’re Blaming It on Eddie Lacy 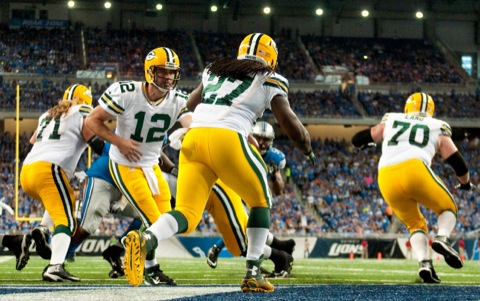 The Green Bay Packers offense is dog shit and coach Mike McCarthy is blaming it on running back Eddie Lacy.

“Eddie needs to play better,” McCarthy said on Monday. “I’m not going to do this anymore. I don’t correct individuals in the media. We’ve seen the film, corrections have been made, our running game wasn’t nearly what it needed to be. Not even close.”

However, the Packers being a bunch of suckbags goes well beyond Eddie Lacy.

The offensive line — the right side in particular — certainly isn’t opening any holes. And if anyone is going to sit there and tell us that Aaron Rodgers needs a running game to be effective, then they’re full of shit.

Rodgers has played some of his best football when the Packers had no running game at all. Just look at 2010 through 2012. Here are some of the guys who carried the ball regularly for those teams — Brandon Jackson, Alex Green and Cedric Benson. Hall of Famers, none of them.

No, Rodgers is also shitting the bed. Cannot remember a stretch when he’s played worse, including his first year as a starter.

And, let’s not forget Buffoon, himself.

“Alright boys, let’s just go out there and [farts]… aw, fuck it! Whatever! Draw some shit up in the dirt!”

So, let’s blame Eddie Lacy, but let’s also blame QB1 and Buffoon for the Packers struggles. Right now, they form a fine trifecta of shit.