Yeah, yeah, yeah. The Minnesota Vikings beat the Atlanta Falcons on Sunday. That probably just means the Falcons aren’t nearly as good as we thought. The Vikings, however, are still totally awesome!

Not on the field, of course. They’ll always suck there. Kind of like in the stands where their “fans” sit. It’s as if god vomited ignorant douchebag into a bowl and that bowl was TCF Bank Stadium on Sundays.

But I digress. How awesome are the Minnesota Vikings?

For full price, no less! 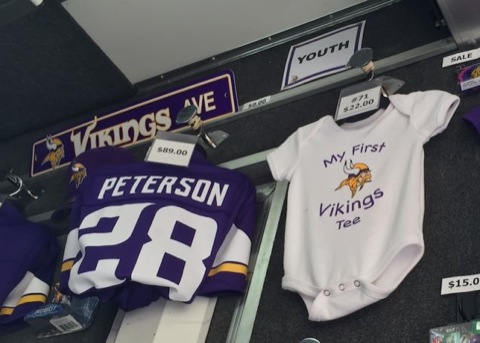 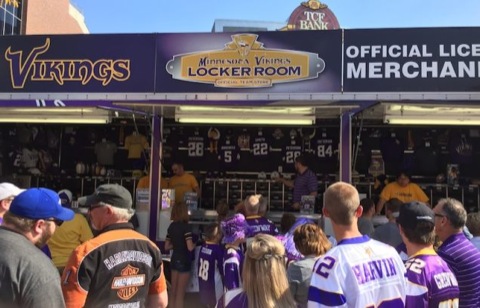 Note that there is kid actually wearing a Peterson jersey right in the lower middle of that second photo. Because why would a parent not want to support Vikings great Adrian Peterson by allowing their son to wear Peterson’s jersey?

Boy, no reason that I can think of.

Meanwhile, you have to wonder how that conversation went inside the organization.

“Yeah, so, we got all these Adrian Peterson jerseys…”

“Maybe we should pull them from the team store.”

“Now, let’s not forget that we have the most ignorant fan base in the league. We could literally put a picture of a can of Hormel Chili on a purple shirt and they would buy it. In fact, that’s a great idea. Let’s get those Hormel shirts into production right away! Boy, am I suddenly hungry. Excuse me. I need to find a can opener. Oh, and please send out for a sixer of Hamm’s right away. I will require a beer refreshing with my chili.”