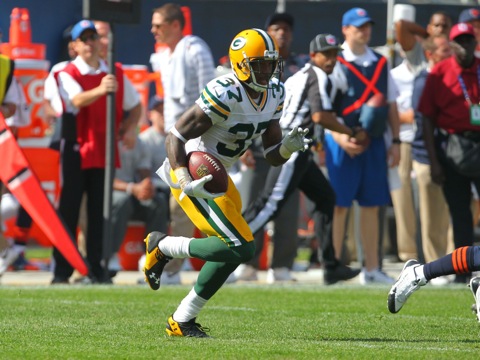 Well, the Green Bay Packers righted the ship for the time being by thrashing the Chicago Bears at Soldier Field on Sunday.

Good for them and good for us. Here are five more thoughts on the win.

THAT, was some terrible officiating
In the first half, the officiating crew watched Julius Peppers get held by Bears tackle Jordan Mills, who also grabbed Peppers’ facemask on the same play. They then proceeded to call illegal hands to the face on Peppers. That was dumbfounding, but it didn’t end there and it wasn’t just one-sided. The Bears were penalized by some real shit calls as well. It’s as if the crew was constantly making make-up calls one way or the other because they totally boned an earlier call. We’ve seen some shit officiating in our day, but something has to be done about these clowns after Sunday’s display. Interestingly, the crew was led by Terry McAulay, who was the lead official in the Super Bowl last season. The rest of this boneheaded crew is umpire Bryan Neale, head linesman Greg Bradley, line judge Tom Stephan, field judge Dyrol Prioleau, side judge James Coleman and back judge Greg Steed. Well done, guys.

Welcome to the NFL
As we noted yesterday, rookie tight end Richard Rodgers had his first two NFL receptions on Sunday. He apparently got the message from his benching that wasn’t a benching last week too. The receptions both came on the Packers’ first drive. Rodgers’ most impressive play was on Randall Cobb’s 46-yard reception late in the game, though. When it looked like Cobb was getting bottled up around the 10, Rodgers hustled downfield and absolutely trucked some asshole Chicago Bear, allowing Cobb to get a little closer to the end zone.

Meanwhile, you may have also noticed a couple undrafted rookies getting their first playing time. Nose tackle Mike Pennel, who was active for the second game, but got his first action against the Bears, had two tackles. Preseason sack king Jayrone Elliott was active for his first game and had one tackle.

Receiver Jeff Janis, a seventh-round pick, was also active because Jarrett Boykin was an injury scratch. He didn’t get any playing time that we noticed, however.

Pretty questionable showing by some defensive “playmakers”
If you expected Julius Peppers to have a big showing in his return to Chicago, you were sorely disappointed. He was in position to make plays a number of times, but didn’t deliver. Peppers had a pedestrian two tackles on the day and no sacks.

Even less impressive was Clay Matthews. Yeah, sure. He got that interception. Tramon Williams made that play. Matthews just happened to be in a fortuitous position. What’s more indicative of Clay Matthews’ day was the fact that he couldn’t seem to get close to the quarterback and that he had just one tackle, an assist.

It gets worse. It gets worse in the form of safety Micah Hyde. For the second week in a row, there were times when Hyde just looked lost and/or incapable of doing anything. He got abused by Bears tight end Martellus Bennett. He was no help for a run defense that desperately needed some.

In fact, none of these three guys were. If the Packers are going to stop the run, as they did for most of their week 2 and 3 games, they need these guys playing at a high level. Right now, it’s debatable whether Hyde even deserves to be on the field. Ha Ha Clinton-Dix and Morgan Burnett — yes, Morgan Burnett — are clearly the Packers top two safeties.

Hello? James Starks?
The running game still isn’t working. Eddie Lacy managed only 2.8 yards per carry on Sunday. That’s awful. Lacy showed flashes at times, but other times he couldn’t get out of the backfield. Part of the reason is the offensive line. When a lineman is getting shoved five yards backwards, that’s probably not going to result in a positive running play. Part of it is play calling. Let’s stop running these fucking toss plays and slow-developing runs designed to go outside. You have a bruising back and a line that can’t run block, just run Lacy straight ahead on quick-hitting plays.

Still, part of it is Lacy. So obviously, James Starks should get more carries, right? Nope. Why would we want to try handing the ball to a guy who averages 5 yards per carry, asked Mike McCarthy?

Starks got zero carries on Sunday. The same Starks who has that 5 yards per carry behind that same shitty offensive line.  That’s right, we wouldn’t want to hurt the feelings of a guy who’s struggling by putting someone into the lineup who might perform better. Then we’d have a guy with a bruised ego AND a potential controversy! We can’t have that!

These guys…
Two guys on the defense that should be singled out for playing well are cornerbacks Tramon Williams and Sam Shields. Recently, they’ve been overshadowed by Davon House. House wasn’t anything to write home about this week. He fell down more than he did anything else. The two highest-paid players in the secondary played like it though. Williams had five tackles and was responsible for Matthews’ pick. Shields had three tackles and a pick of his own. What’s more telling is they shut down the Bears big, bad receivers — Brandon Marshall and Alshon Jeffery. Marshall had just two catches for 19 yards. Jeffery had four for 39. That’s some stellar cornerback play.