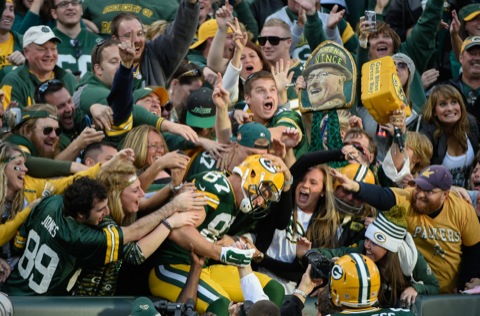 It was by no means pretty, but the Green Bay Packers got their first win of the 2014 season by outlasting the New York Jets 31-24 at Lambeau Field on Sunday.

I don’t think it was just me. Did that game take forever? I was at the game and we ended up leaving at 7 p.m., which would have the time of the contest pushing four hours. Or maybe it wasn’t actually any longer than a normal game, it just felt like it.

It appears this year’s Green Bay Packers are going to be exhausting. And probably frustrating.

Most people thought the Packers would curb stomp those assholes. Instead, they spotted them 18 points and then got carried by one guy and a career day to a fairly improbable victory.

Well, way to make things way more interesting than they needed to be, you dicks.

Here are five more thoughts on the win.

Davon House knows what to do in a contract year
You probably noticed that cornerback Davon House was on the field an awful lot on Sunday. He was the standout of a pretty solid effort by the Packers secondary, knocking away two passes and recording two tackles. It was a good day for a guy playing for his next contract. B.J. Raji could take some notes. House also got a little bump up the depth chart. He replaced Casey Hayward in both the nickel and dime. Hayward was demoted for, get this — missing tackles. Word is, he missed three against Seattle. There were so many misses in that game that we didn’t even notice. However, we’re happy that the Packers actually appear to FINALLY be serious about getting guys out of the lineup that don’t perform.

What, exactly, is the offensive game plan?
It’s not really clear what’s going on here, but two weeks in a row, the Packers look like they have no idea what they’re doing on offense. Against the Jets, the Packers dropped back to pass 46 times. They ran 22 times. I get that the Jets are good against the run and bad against the pass AND that the Packers were down for most of the game, but that ratio is still way off of what it should be. The Packers barely ran at all in the first half, even before they were down 18. They also seemingly made it a point to run behind right tackle Derek Sherrod, who’s only in there because Bryan Bulaga is injured. Brilliant idea there. The passing game wasn’t any more impressive. Only one catch by a tight end and two total targets by our count. If one guy has to account for half of your total offense every week, you’re going to be in trouble. Buffoon really out buffooned himself with the play calling again this week.

Speaking of Derek Sherrod
First of all, it was the right move to hold Bryan Bulaga out. He has a knee injury and you really don’t need him injuring it worse or hobbling around out there on one leg because of pride or some shit. His replacement, Derek Sherrod, is still pretty awful, but at least he showed some improvement over last week (and the preseason). Sherrod did get blown by early in the game and gave up a sack and he couldn’t get any push in the running game. That being said, the Packers dropped back to pass almost 50 times and Aaron Rodgers is still among the living, so obviously Sherrod was at least serviceable.

And speaking of Aaron Rodgers
He threw for 346 yards, which is swell, but Rodgers still looks like he has his head up his ass if you ask me. First of all, if it wasn’t for Jordy Nelson, that gaudy passing yardage number wouldn’t be nearly as big. There was plenty of crap from QB1 on Sunday. First, he fumbled the snap on the opening play. You can talk about center exchanges all you want, but Rodgers is the veteran in that combo. Grab the fucking ball. Also, when do you think this guy is going to learn that the quarterback can’t hold onto the ball in the pocket for five seconds in the NFL? Rodgers was sacked four times on Sunday. Two of those were entirely his fault. GET RID OF THE BALL, YOU ASSHAT! Finally, there were some drops by receivers on Sunday, but there were more poorly thrown balls by Rodgers. The accuracy that we’ve grown accustomed to in recent years, hasn’t been there this year. Despite the numbers on Sunday, I would argue that Rodgers hasn’t played a good game yet this season.

We like the 4-3
We’re not sure what the breakdown is, but the Packers seemed to use their 4-3 defense more than in week 1, when they had all kinds of communication and substitution problems. We like the 4-3. The Packers personnel is better suited to the 4-3. The 4-3 gets Mike Neal on the field more and we like Mike Neal. Mike Neal disrupts shit. The 4-3 also keeps clowns like Clay Matthews and Julius Peppers out of coverage. Although Julie almost had a nice interception on Sunday. Still, we’d rather have Julie up on the line chasing after the quarterback. I wouldn’t be surprised if the Packers and Dom, Dom, Dom, Dom are running the 4-3 more than the 3-4 pretty soon.