Eddie Lacy is Back 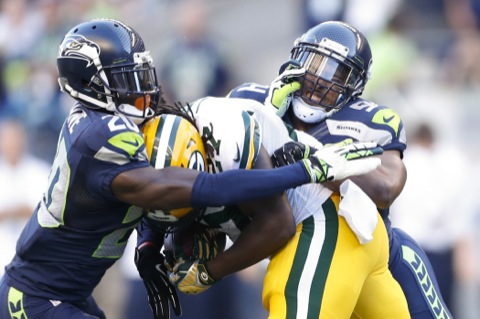 Eaaaaaaaaaaaaasy. Eddie Lacy. That guy has apparently passed all of his concussion-related tests because he was back at practice on Thursday.

That’s a sure sign that he’ll be in the starting lineup when the Green Bay Packers face the New York Jets this Sunday.

Lacy suffered a concussion in the second half of the Packers’ season-opening loss to the Seahawks last Thursday. He carried 12 times for 34 yards in that game. That’s a pretty un-Easy-Ed-like 2.8 yards per carry.

But the Packers couldn’t do jack on offense as a whole, so we’re certainly not going to fault Ed for the poor showing.

The Jets will present another tough challenge for the Packers offense, particularly the running game. So it’s good that all the horses will be in the stable.

In other injury news, both tight end Brandon Bostick and tackle Bryan Bulaga practiced for the second straight day. Bulaga is attempting to play a week after spraining his MCL. Bostick is coming back from a preseason leg injury.

With Thursday being the only padded practice of the week, seeing how Bulaga’s knee feels on Friday should determine whether he can play or not.

Want more good news? Inside linebacker Brad Jones sat out for a second straight day with a quad injury. This is a great way for the Packers to get that joker out of the starting lineup — by pretending he has an injury.