Of Course Colt Lyerla Got Arrested 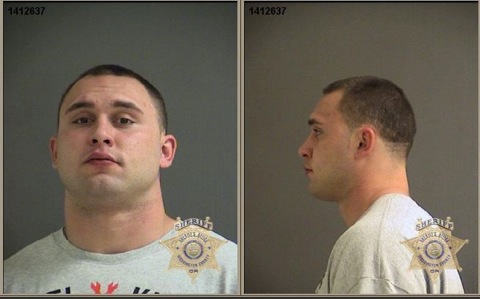 Colt Lyerla, who spent most of training camp with the Green Bay Packers, is back in Oregon and probably up to his old tricks. That is, getting high and getting arrested.

Lyerla was arrested over the weekend for driving under the influence of intoxicants. Those intoxicants are suspected of being either illegal drugs or prescription meds.

Lyerla was arrested about a year ago, after leaving the Oregon football team, for cocaine possession. So this isn’t his first rodeo.

Lyerla was signed by the Packers after a tryout in May. He suffered a knee injury during Family Night and then got jerked around by the organization. First, they waived him with the intent of re-signing him and putting him on injured reserve. Lyerla went unclaimed and the Packers did indeed follow through on that. That is, right up until they decided to release him again.

The second release came about because the Packers were supposedly concerned about keeping Lyerla out for an entire year, which is what would have happened if he were on injured reserve. Since he left his Oregon team in September of 2013, a stint on injured reserve would have meant barely playing or practicing for two years.

The Packers gave Lyerla an injury settlement and sent him on his way, while holding out the carrot that maybe we’ll bring you back later in the season.

Well, big surprise that a guy with substance abuse issues couldn’t stay on the straight and narrow.

As someone who has enjoyed his (and your) fair share of substances, I can tell you free time and a pile of cash is best used for one thing. Well, maybe two things if you like escorts. And who doesn’t?

Look, it’s a business and blah, blah, blah, but if the Packers really gave a shit about Colt Lyerla, they would have kept him in the program.

Sending him away with an injury settlement, well… they may as well have given him a briefcase full of blow, a handle of Jack, a box of condoms and a suite at the Hilton.

So Lyerla got caught rolling around under the influence of something. Amazing.

We understand it isn’t the Packers’ job to watch out for the welfare of the players, but they position the organization as one that holds itself to a higher standard.

And maybe they do hold themselves to a higher standard. When it’s convenient for them.