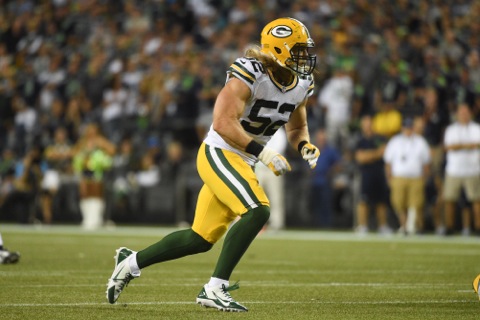 We know you’ve all been wondering when Clay Matthews will get injured and then stand around on the sidelines for six games.

Matthews injured his groin Sunday against the Lions. He stood around on the sideline for much of the second half and so we all figured, yup, Matthews has clearly decided that now is the time when he’s going to take his annual in-season hiatus.

Can’t play 16 games, you know. Not unless he starts getting Aaron Rodgers’ money.

Matthews actually practiced on Wednesday. He was limited and coach Buffoon told the media Matthews is day-to-day.

So, yeah, we suppose Matthews could decide he isn’t going to go this weekend in Chicago and give us whatever bullshit excuse about playing it safe, but that seems unlikely if he’s practicing on Wednesday.

We know it will happen at some point though. That is, Matthews pulling something — most likely a hamstring — and getting a paid vacation to watch the Packers play.

I’m so confident it’s going to happen again this year, I’ve got 10-to-1 odds on Clay Matthews playing in all 16 games. Any takers?

A Little Perspective on the Packers’ Slow Start

A Little Perspective on the Packers' Slow Start