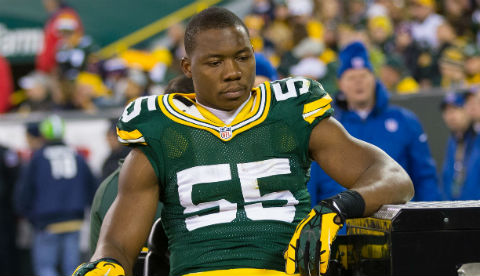 As predicted, the Year of the Torn ACL continues for the Green Bay Packers. The latest victim is Child Warrior Andy Mulumba.

Mulumba, who had to be helped off the field during the fourth quarter of the Jets game, made the announcement himself.

1/2 Unfortunately, My ACL injury was confirmed this morning, and it's just one of those bumps on the road! Nothing that I can't overcome!

2/2 prayers, hard work, dedication, family and love for this game will help me comeback better than before!! #mindset

Mulumba will get a one-way ticket to injured reserve, which means the Packers will soon have an empty roster spot. He’ll join three other guys with torn ACLs there.

Mulumba was primarily used on special teams this season. He had been credited with one tackle. In 2013, Mulumba made the team as an undrafted free agent and actually started three games at outside linebacker. Last year he notched 30 tackles and a sack.

This isn’t a huge blow to the Packers, considering Mulumba’s role on defense has been more or less nonexistent in 2014.