Who the Hell is This Jayrone Elliott Character? 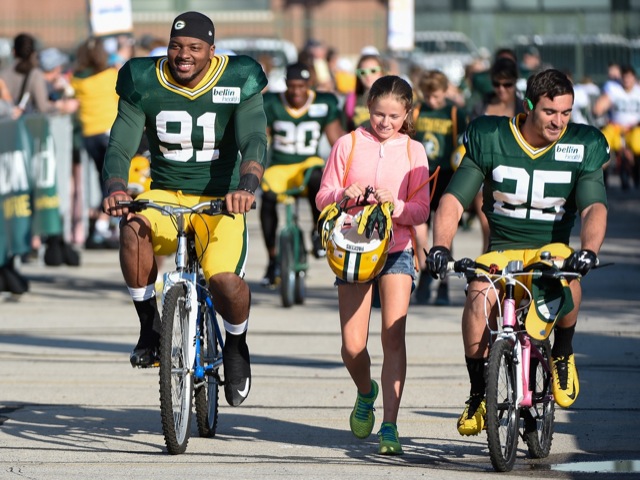 Jayrone Elliott went from complete unknown to flavor of the week in the span of four plays.

That’s how many snaps Elliott played on Saturday against St. Louis and he certainly made the most of them. The outside linebacker had three sacks in that span and forced a fumble on one of them.

Now, we’re going to largely ignore the fact that he was matched up against the oft-abused Sean Hooey for those four snaps. But let’s be honest for a moment — that guy is awful. I mean downright horrible.

At any rate, Elliott certainly took advantage of his opportunities and he’s shown some things in practice as well. Early in training camp, Elliott was beating just about everyone in one-on-one pass rushing drills. So, there’s reason to believe that maybe he has a future in the NFL.

It might very well start off on the practice squad, but Elliott is obviously someone to keep an eye on.

You already know how the Packers acquired him. Undrafted free agent! Booyah!

Elliott played defensive end at Toledo, where he was first-team All MAC as a senior. In 2013, he registered 70 tackles, including nine sacks and 14 tackles for loss. He also forced five fumbles.

Elliott is 6-3, 255 and could probably stand to add a little weight. However, he’s shown a knack for getting after the passer and a nose for the football. Those are two things that will keep you on an NFL roster.

So why didn’t this guy get drafted? That’s a good question. He didn’t really appear to be on anyone’s radar at all.

He’s what you’d call undersized for one, having played collegiately at 240. The only other knock we could find is that Elliott is sometimes too aggressive and over pursues.

So maybe the Packers will be getting the last laugh on the rest of the league.

Now, racking up three sacks against Sean Hooey is easy. Making the Green Bay Packers isn’t and Elliott is really going to have a tough time.

The Packers will presumably keep six outside linebackers. Four of those will most certainly be Clay Matthews, Julius Peppers, Mike Neal and Nick Perry. Elliott is competing for one of the remaining two spots with holdovers Nate Palmer and Child Warrior Andy Mulumba, and fourth-round draft pick Carl Bradford. Adrian Hubbard, who played at Alabama and was probably the Packers most-heralded undrafted free agent signing, is also in the mix.

This might be easier if the Packers would move Bradford, who obviously isn’t a fit at outside linebacker, inside already. Regardless, we can’t see him getting released the same year he got drafted in the fourth round.

So that really leaves only one spot and I think we can all agree upon Child Warrior Andy Mulumba, who’s likely still just scratching the surface of his potential.

Getting Elliott through to the practice squad might be a dicey proposition. It might be the type of situation the Packers are faced with though.

That is, unless they decide it’s time to cut the cord on Nick Perry, who’s obviously nothing more than just a guy.