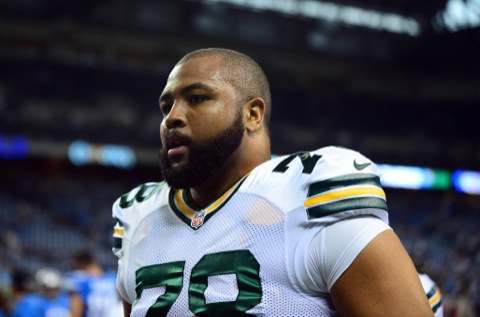 We all got pretty excited about former first-round pick Derek Sherrod after week one of the preseason. We’re a lot less excited now.

The tackle, who hasn’t played, like, ever because of injury saw extensive action against Tennessee and he held his own quite well. That was encouraging for two reasons.

One — hey, this guy might not be a total waste of a draft pick. Maybe the Green Bay Packers might get something out of him. As a backup, sure, but something. Two — well, that Don Barclay injury doesn’t look as bad now. Clearly the Packers are fine if David Bakhtiari or Bryan Bulaga goes down because Sherrod can step in.

Well, not so fast.

Sherrod was pretty much dominated by the St. Louis Rams backups on Saturday.

Quick, who gave up the first sack to the first gay guy in the NFL? If you said Derek Sherrod, you’re a winner!

Granted, Matt Flynn held the ball for about three hours on that particular play, but the point is Sherrod got beat by Michael Sam, who’s a guy on the roster bubble.

According to Bob McGinn, Sherrod didn’t fare any better against Eugene Sims, another backup.

In 29 snaps at left tackle, Sherrod yielded knockdowns in 2.7 and 2.3 seconds to Sims off the edge, missed Sims a third time, failed on a back-side cut and was penalized for a false start.

What would you call that ladies and gentlemen?

Just imagine if Sherrod were facing Robert Quinn. Whoever was playing quarterback would be in a box getting lowered six feet into the ground right now.

Sherrod was a finesse guy coming out of college, but he’s become more powerful over the past couples seasons. Finesse or power didn’t really matter on Saturday. Sherrod was too slow footed to use either.

Maybe he’ll rebound, but as it stands, the Packers could very well have another Marshall Newhouse situation on their hands if Bulaga or Bakhtiari go down.

Who the Hell is This Mike Pennel Character?