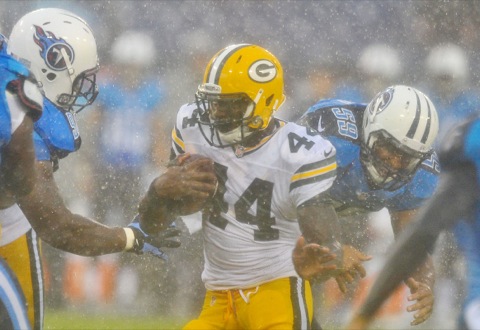 We got our first glimpse of the 2014 Green Bay Packers on Saturday night, or a version of them anyway, when they dropped a 20-16 decision to the Tennessee Titans.

We say a version because three starters were held out — quarterback Aaron Rodgers, running back Eddie Lacy and receiver Jordy Nelson. That seems like a fine idea considering it was dumping buckets of rain when the game started.

In place of those three guys were Matt Flynn, who played the majority of the first half, James Starks and Jarrett Boykin.

Starks was the story on the Packers’ first drive. He looked like he was already in midseason form, effectively working the cutback lanes and running for 49 yards and a touchdown on six carries.

That first series was as much as we got to see of the Packers pseudo first-team offense. On the second series, Starks and every other offensive starter besides Flynn and center J.C. Tretter, who is in his first year as a starter, were on the sideline.

Flynn looked pedestrian, completing 5-of-10 passes for 49 yards. Most of those were of the dink-and-dunk variety. Any sort of downfield passing game was pretty much nonexistent. Until…

Scott Tolzien entered the game. There was a noticeable difference in the offense. Tolzien threw downfield and with authority, finishing 8-of-12 for 124 yards.

Meanwhile, the Packers first-team defense looked acceptable. Definitely vanilla, but certainly better than what we saw at the end of last year.

The old bend-but-don’t-break philosophy certainly appeared to be in use and it worked well enough. Now, you could argue that the Titans offense is dog shit and that made the Packers defense look better than it is, but it’s tough to say at this point.

What we know is the defense didn’t give up any huge plays and that’s a step in the right direction.

Early on, special teams almost turned into the story of the game. The Packers had rookie Davante Adams returning punts. He did that exactly two times in his college career. Mix in a torrential downpour with some lack of experience and you get two muffed punts in two tries.

Adams recovered the first muff, but Tennessee got the second. That turned into a 13-yard Shonn Greene touchdown run on the next play, where Brad Jones displayed some midseason form by being too far inside while Julius Peppers was, for some reason, too far outside.

Probably for lack of giving a fuck.

Micah Hyde took over on punt returns from there. On kickoffs, DuJuan Harris got the first crack. He muffed one too, but recovered it and looked pretty solid overall, averaging 31 yards on two returns.

As far as overall competitions, we can see that tight end is the most wide open. Andrew Quarless started, but didn’t have any catches. He should of had a big gain from Tolzien near the end of the half, but let the ball go through his hands. Both Richard Rodgers and Brandon Bostick were used early and often.

Rodgers had one catch for 10 yards and Bostick had one for 24 yards.

Beyond that, here’s who we thought stood out among those guys fighting for roster spots.

Running back Rajion Neal had a nice showing running the ball in the second half. He had five carries for 39 yards and the Packers only other touchdown. We’re not jumping to any conclusions, but he looked better running the ball than DuJuan Harris did. Harris had seven carries for just 18 yards.

It should be pointed out that Harris played with Flynn at quarterback and Neal played with Tolzien.

On the flip side, receiver Chris Harper didn’t do himself any favors. He caught two balls for 55 yards, which was a team high for yardage, but he also dropped two passes, including a two-point conversion where he was wide open.

On defense, it was two cornerbacks who stood out.

First, the venerable Jarrett Bush. He had a team-high eight tackles and also recorded a sack. Seems like he wants to stick around.

We can also see why Jumal Rolle is ahead of sixth-round pick Demetri Goodson on the depth chart. He makes standout plays. Rolle had a solid open-field tackle of Bishop Sankey for no gain in the first half and strip sack in the second that was recovered by Jake Doughty.

Most importantly, despite the weather, the Packers didn’t appear to suffer any injuries, serious or otherwise.