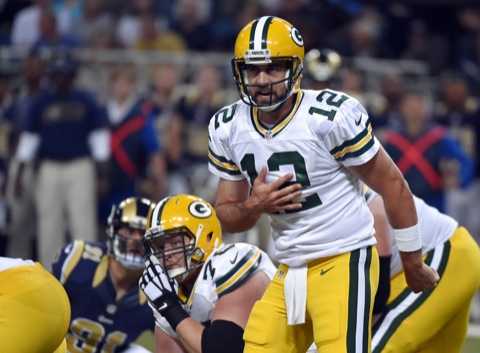 The Green Bay Packers beat the St. Louis Rams 21-7 in their second preseason contest, but that’s not at all important. What is important is that we got a small glimpse of what the Packers are really going to look like this year.

Aaron Rodgers, Eddie Lacy and Jordy Nelson got their first action of the preseason, with the No. 1 offense going two series (minus Lacy, who only played one). Those two offensive series were something to behold.

The Packers ran no huddle right off the bat, spread the ball around and marched down the field for a touchdown — a three-yarder by Randall Cobb. The second drive was nearly as nice, but bogged down at the end and resulted in a Mason Crosby field goal after a Jordy Nelson touchdown was nullified by a David Bakhtiari penalty.

Here are the numbers that are important. Aaron Rodgers: 11-of-13 for 128 yards and a touchdown. Eddie Lacy: five carries for 25 yards, two catches for 22 yards. Three catches a piece by Jarrett Boykin and Randall Cobb.

The Packers No. 1 defense also played two series and gave up one touchdown.

The TD came on a perfectly thrown ball by Sam Bradford midway through the second quarter. Micah Hyde had great coverage on Lance Kendricks on the play. Bradford just put it where only Kendricks could catch it.

The scoring drive featured two big plays by receiver Brian Quick. Quick caught a ball in front of Sam Shields for 41 yards and then drew a pass interference penalty on Shields that moved the ball to the Packers’ 17. Not a great day for the Packers’ No. 1 cornerback and the secondary as a whole.

You could say those clowns are in midseason form already.

There was reason to be excited about the Packers No. 1 defense though. They looked tremendous against the run, generating a consistent push into the backfield.

So yeah, Julie. We get it. You’ll turn it on when you feel like it.

Today we learned that the Packers offense is going to be a force, the front seven should be improved (but how could they be worse?) and the secondary is still a work in progress.

Now let’s get to the rotations.

Scott Tolzien got the nod as the No. 2 quarterback, playing late into the third quarter. At first, he looked awful, but he also had zero time to throw. Once Scooter got some protection, he looked serviceable. However, his accuracy wasn’t what we’ve seen.

Matt Flynn only made a brief appearance, going 3-of-4 for 44 yards and a touchdown. Flynn can thank Jeff Janis for that stat line. Janis accounted for 34 of those yards on a touchdown catch and run late in the third quarter.

At tight end, the Packers led off with rookie Richard Rodgers, who didn’t have any catches and also showed his blocking needs work. Brandon Bostick, who had one catch for 9 yards, was second, followed by Andrew Quarless. Last year’s starting tight end was the most impressive on this day, catching four balls for 58 yards.

On special teams, the Packers are looking at all kinds of returners. They used Micah Hyde, Jeff Janis, Myles White and Davante Adams on punt returns. Only Janis and Adams actually returned a punt, but the fact that Hyde was back there first is a good sign that he’s the guy when the season starts.

On kickoffs, DuJuan Harris was the guy. He averaged 18 yards on two returns, which isn’t impressive. Harris didn’t do himself any favors running the ball either. He was more effective than last week, gaining 32 yards on seven carries, but he also fumbled.

Finally, there are always little-known guys who make plays and catch our attention. This week those guys were defensive tackle Mike Pennel and outside linebacker Jayrone Elliott.

We’ve been hearing a bit about Pennel throughout camp and he had a sack on Saturday. What’s more, he had it in the first half, so he’s obviously moving his way up the depth chart after coming in as an undrafted free agent.

Mark this guy down for a roster spot.

Elliott, an undrafted guy from Toledo, had three sacks in the game. While that’s impressive, they all came in the fourth quarter. They also came against a guy named Sean Hooey, who clearly has no business being in the NFL, CFL or maybe even the Arena League.

That’s not to take anything away from Elliott — he took advantage of his opportunity. However, we’re not marking him down for a roster spot just yet.

Finally, and most importantly, the Packers didn’t suffer any serious injuries on Saturday. So on to the dress rehearsal!

Previous Article
Rodgers, Nelson Hanging with the St. Louis Cardinals
Next Article
Who the Hell is This Mike Pennel Character?