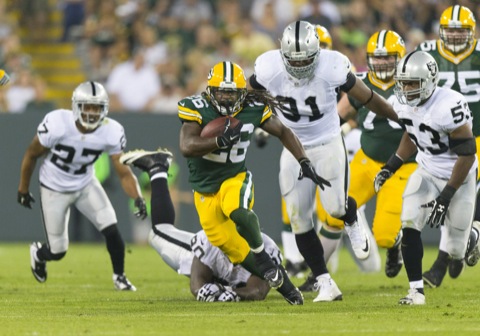 The Green Bay Packers did what they’re supposed to do to a team like the Oakland Raiders in their regular season tuneup. They beat them handily, 31-21 at Lambeau Field.

Most of the Packers starters went nearly the entire first half and it was a mixed bag, at least for the offense. Aaron Rodgers, who played about a quarter and a half, wasn’t as sharp as we was in week 2.

The Packers scored easily on their first drive, largely behind 36 yards rushing from Eddie Lacy in his only series. The offense then did absolutely nothing on their next three series, racking up just 10 yards total.

Rodgers got things going again, thanks in part to plenty of Raiders’ penalties, with touchdown passes to Jordy Nelson (12) and Andrew Quarless (6).

Most of Rodgers’ passing yards (74) came on dump-off passes to running backs. There was no downfield passing game to speak of, as Rodgers finished 9-of-20 for 139 yards.

While the offense started hot and then fizzled for a while, the defense did things the opposite way.

The Packers allowed the Raiders to score on their first possession, thanks to a 40-yard touchdown run by Maurice Jones-Drew. That beauty featured missed tackles by Morgan Burnett, Micah Hyde and your boy, A.J. Hawk.

From there on out, the Packers first-team defense was dominant with — get this — the secondary leading the way. I am not even shitting you.

Sure, there were some penalties, but the Packers secondary was stellar. Raiders quarterback Matt Schaub had no one to throw to on a number of occasions. Davon House, who got plenty of playing time with Casey Hayward sitting out, had a great game. Micah Hyde was solid at safety and even Morgan Burnett made a play, knocking a pass away with around four minutes left in the second quarter.

When is the last time you saw Morgan Burnett make a play?

I know. None of us could remember either.

What’s more, Julius Peppers is starting to get us real excited. He had a sack and two tackles for loss on the evening.

We’re guessing Peppers likes not getting double teamed on every play.

Let’s be honest here, though. As dominant as the Packers defense looked after that first series, they were playing the Raiders, who won just four games last year.

When it was all said and done for the starters, the Packers were up 22-7.

If running back DuJuan Harris was in danger of losing his roster spot after fumbling last week, he made the team with his performance on Friday might. Harris got his first action with the first team and made the most of it.

He actually got the offense back on track when he entered on the fifth offensive series, taking a short pass from Rodgers for 31 yards and setting up the team’s second score. He also got it done on the ground, looking more or less like the guy who was starting for the Packers at the end of 2012.

On the evening, Harris had 12 carries for 56 yards and two catches for 42. He was also the No. 1 kickoff returner, bringing one back for 34 yards.

While Harris was busy reclaiming his role, Matt Flynn was losing his grip on his.

Flynn took his turn in the No. 2 quarterback slot and sucked it up to the tune of 4-of-10 for 37 yards and a pick. The interception came on the first play of Flynn’s second series, when rookie linebacker Kahlil Mack plucked an ugly-looking screen pass out of the air.

Scott Tolzien entered late in the third quarter and led the Packers to a score on his first drive. He was 5-of-7 on that drive, ending it with a 15-yard scoring toss to Alex Gillett.

Now it’s all set up for him to claim the No. 2 job in the final week of the preseason. Scooter will get the first shot in the game and all he has to do is play as well as Flynn in our estimation. This game gave him the lead in the competition.

Among the defensive scrubs, a few guys caught our eye.

First and foremost was last week’s hero, Jayrone Elliott. After racking up three sacks against some dubious competition in week 2, Elliott came back and recorded another sack and a batted ball against the Raiders.

This time, Elliott wasn’t even facing the eighth-string tackle. He was in the game in the third quarter, when Oakland was playing its second-team offense.

Can we all agree that this guy gets a roster spot?

Another guy that appears to be moving up the depth chart is cornerback Jumal Rolle, who was a star back in week 1 of the preseason. Rolle was actually in the game in the second quarter this week, when a number of first-teamers were still on the field and had a nice stick for a short gain.

Yes, it was a fourth down-and-short play that netted a first down, but Rolle made a hell of an open-field tackle for a gain of one.

Speaking of nice tackles, safety Sean Richardson laid some fucking wood on running back Kory Sheets in the third quarter, knocking him right the hell out of the game.

Has a Packers safety hit anyone like that since Chuck Cecil?

And just when we were ready to give Nick Perry’s roster spot to someone else, that clown comes up with a strip sack that was recovered by Mike Neal. So we might as well keep him around for another year.

The biggest development of the evening, however, surrounds B.J. Raji, who suffered an arm injury that knocked him from the game. We’re hoping he was just held out as a precautionary measure.

Despite being fat and useless last season, Raji has been holding up his end of the bargain so far this year. The Packers don’t need to roll into Seattle with Mike Pennel in the starting lineup.

Previous Article
Why Isn’t Jerry Kramer in the Hall of Fame?
Next Article
B.J. Raji Believed to Have Torn Bicep