Packers First Round of Cuts Include Chris Harper 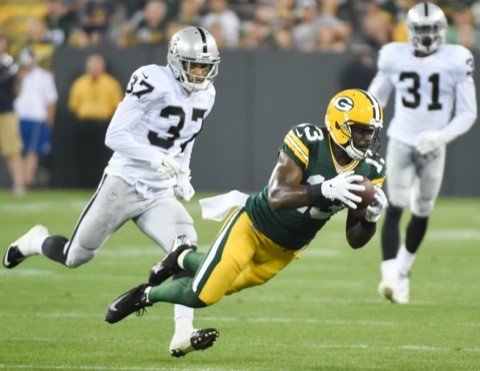 The Packers roster stands at 81 with the release of these seven guys. It will shrink to 78 when the team officially places receiver Jared Abbrederis, tackle Don Barclay and nose tackle B.J. Raji on injured reserve.

Three more guys will have to be cut by Tuesday, the league deadline to get down to 75 players.

Rarely is anyone’s release in this round of cuts a surprise. If any one move comes as a minor surprise it’s Chris Harper, who was a fourth-round draft pick by the Seattle Seahawks last year.

He was released by Seattle prior to the 2013 season and signed to their practice squad. Then the 49ers signed him to their active roster and released him. And now he’s suffered the same fate with the Packers.

Harper showed some big-play ability in the preseason, but he also reminded us of old Stone Hands Freeman at times. With all the receivers the Packers have, guys can hardly afford to be dropping balls that hit them right in the hands.

What’s hard to believe is that three teams have given up on a guy who was a fourth-round draft pick just last year, already.

The rest of the guys who were released today were all undrafted free agents.

Previous Article
B.J. Raji is Out for the Year
Next Article
J.C. Tretter is Injured… Again