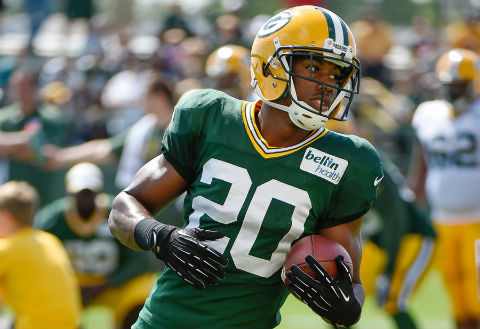 The Green Bay Packers have whittled their roster to the final 53. Here’s how they did it and what we think about it.

These guys got their pink slips today.

Offensive lineman Garth Gerhart — Gerhart was on the practice squad last year, but is pretty non-distinct.

Tight end Justin Perillo — Was an undrafted rookie signee this year and actually played better than the more heralded Colt Lyerla, but the Packers are set at tight end.

Tight end Jake Stoneburner — Well, thank god the Packers won’t be keeping 18 tight ends this year. Stoneburner spent part of 2013 on the active roster, but was really only a special teams player. He would have been no better than the No. 5 tight end if he stuck this year. We don’t know any NFL club that needs five tight ends.

Safety Chris Banjo — This guy certainly played well enough to be on the roster. He was one of the standouts of the final preseason game. The Packers have four other guys they want to keep at safety though. Five safeties is a luxury. And with this move, the whole best 53 philosophy goes out the window. Big Ted isn’t going to cut Chris Banjo and tell us he kept the best 53 players. We’d take Banjo over Morgan Burnett and we’re only half kidding about that.

Receiver Myles White — We had White on our final roster, but he was one of the last guys to make it so this isn’t a surprise. The Packers have a lot of talented receivers and in White, they release one that was on their roster last year.

Cornerback Jumal Rolle — Well, this one is a head scratcher. What, exactly, do you have to do to make the Green Bay Packers roster? Suck Ted’s cock? I mean, all Rolle did all preseason was make plays. Obviously making plays isn’t the recipe for getting a spot on the team. Don’t go out there and make plays, guys! Just gonna get you cut! It’s a joke the Packers kept Demetri Goodson over this guy.

Receiver Alex Gillett — Gillett is a converted college quarterback who spent last season on the practice squad. He made enough progress this year that at times, you thought to yourself, hey, this guy might be legit someday. Today is not that day.

Receiver Kevin Dorsey — Dorsey was a seventh-rounder in 2013 and missed all of last year on injured reserve. He’ll be missing this year for another reason.

Running back Michael Hill — Hill showed some flashes here and there, but the Packers have enough running backs. Lacy, Starks, Harris. No room for Hill.

Running back LaDarius Perkins — Perkins came on strong down the stretch, but again, it’s a tall order cracking the Packers top three. Not sure that’s ever been uttered before.

Cornerback Ryan White — Didn’t really make any standout plays that we recall and plays a position where the Packers are loaded. In this case, two strikes and you’re out.

Offensive lineman John Fullington — We can’t say we know anything about John Fullington, other than the fact that he got cut today. That’s unfortunate.

Safety Tanner Miller — Miller is the guy who’s name was on the bottom of that graphic of the Green Bay Packers safety depth chart they kept bringing up on Thursday night. And you were like, oh, the Packers have a sixth safety, huh? He’s getting cut.

Inside linebacker Jake Doughty — Doughty seemed to be around the ball every once in a while, but the Packers are loaded with mediocre inside linebackers. They don’t really need another one.

Inside linebacker Adrian Hubbard — Hubbard was the Packers most heralded undrafted free agent signee. He did have a couple of sacks during the preseason, but otherwise, didn’t really do much to stand out. Turns out, there were other guys who were much better in that undrafted free agent class.

Defensive end Carlos Gray — You could make the argument that Gray outplayed third-round pick Khyri Thornton, but that really didn’t take much.

Defensive lineman Luther Robinson — Pretty much falls into the same category as Gray.

Here’s who landed on injured reserve.

Defensive lineman Khyri Thornton — The third-round pick got injured in Thursday night’s game. However, he had shown absolutely zero prior to that, so this isn’t a surprise. Basically, the Packers are able to stash a draft pick on IR they knew wasn’t going to contribute this year.

Tackle Aaron Adams — Adams had a decent chance of making the roster. That is, had he not torn his ACL and MCL on Thursday.

Inside linebacker Nate Palmer — Like Adams, Palmer tore his MCL on Thursday. Unlike Adams, he probably wasn’t making the roster anyway. The Packers hastily switched Palmer from outside linebacker to inside linebacker at the beginning of the week (along with Carl Bradford). That’s a good sign that you’re not playing well enough at your original position.