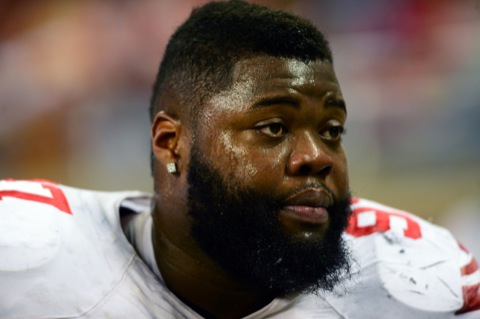 Is it okay to laugh at someone who’s been shot? In this case, we’re going to go with yes. Minnesota Vikings defensive tackle Linval Joseph was shot in the leg last night.

You’ll never in a million years guess where this shooting occurred.

Up in the club. Oh, wait. That is what you would have guessed? Alright, never mind then.

The Vikings, of course, played some football yesterday. That is, if you can describe what they do on a field as “playing football.” So naturally, fat man Joseph decided the best idea he had all day was to get to the club for some total post-game awesomeness.

Does anything good ever happen in the club?

Not to my recollection. Maybe you get some ass, but that usually comes with a side of chlamydia.

Joseph was reportedly an innocent bystander to someone else’s scuffle. A stray bullet struck his calf.

Here’s the statement from the Queens.

“Following last night’s preseason game, Minnesota Vikings defensive tackle Linval Joseph was an innocent bystander to the shooting that took place at the 400 SoundBar in downtown Minneapolis. Linval suffered a minor injury during the shooting when a stray bullet struck his calf. He was immediately taken to the hospital where he was treated for his injury and released. He is expected to return to his coaches and teammates this week.

“The entire Vikings organization is extremely thankful that Linval was not seriously hurt, and our thoughts are with all of the victims of this shooting. The team will defer any further comment to the Minneapolis Police Department during its ongoing investigation.”

Do you think he was just standing there minding his business and suddenly yelled “Ow! Fuck! My calf!” as he fell to one knee clutching the back of his leg?

More importantly, does it not seem totally appropriate that this happened to someone on the Vikings?