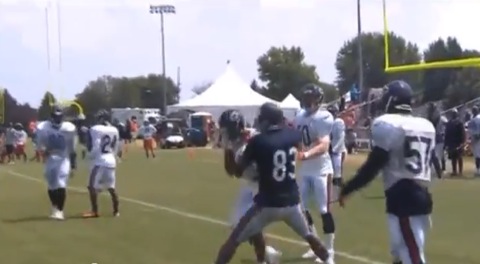 Ah, the Chicago Bears. Maybe they shouldn’t be planning that championship parade just yet.

On Monday, tight end Martellus Bennett caught a pass and was knocked down by cornerback Kyle Fuller, who was clearly trying to strip the ball. Then Bennett got up and violently slammed Fuller to the ground by his neck.

Kind of reminds me of the time Green Bay Packers legend and all-time great Charles Martin slammed a certain Funky QB to the ground. Of course, that slam achieved its intended purpose.

Bennett’s was completely idiotic because 1. that guy is your teammate, and 2. that guy is a first-round draft pick chosen to be one of the saviors of that embarrassment of a defense.

So basically, the Bears can’t even execute a cheap shot appropriately. Too stupid, we suspect.

Today, the Bears announced that Bennett has been fined and suspended for an undetermined amount of time for conduct detrimental to the team. Yes, he was suspended by the Bears, not the league.

It’s good to see that AIDs patient Marc Trestman has everything under control down there in Bourbonnais.

Colt Lyerla will Be Out Several Weeks

Don Barclay Has a Knee Injury

Don Barclay Has a Knee Injury