Matt Flynn is Winging It! 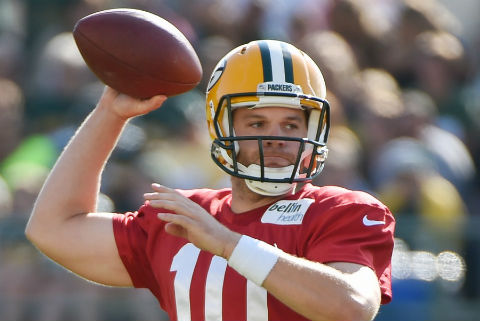 What’s the different between Matt Flynn and Scott Tolzien, AKA Scooter? Well, a big arm for one thing. Scooter has one and Flynn doesn’t.

That isn’t the only difference, but it’s one of the primary ones and also one of the reasons we picked Scooter to be the Packers backup quarterback this season.

Not so fast, says Matt Flynn!

Although his arm is never going to be described as a canon, Flynn is apparently winging the ball around with more velocity than he did last year. We didn’t notice it on the field in 2013, but Flynn was evidently bothered by the elbow he injured back in camp with the Raiders. That affected his velocity.

He still managed to come back — after being cut by two other teams — and lead the Green Bay Packers to enough victories to stay in the playoff race with that puss arm while Aaron Rodgers was out.

We know Flynn is a great fit for the Packers offense. He proved it in his first go-round in Green Bay and he showed enough last year to get himself re-signed this offseason. Despite that, he’s still going to have beat out Scooter or play well enough to convince the Packers to keep three quarterbacks on the roster.

The good news for him is it sounds like he has all the tools in his toolbox at his disposal.

“As a thrower, any time you get that sore arm, that dead arm, it’s never easy,” Packers quarterbacks coach Alex Van Pelt said. “I’ve experienced it many times. It’s not fun. But you make do with what you have that day. That’s one of Matt’s strengths. He plays to his strengths. He did a good job for us last year, but this year it does look like it’s coming out.”

The preseason games should ultimately decide this race. Unless, you know, one of these guys tears an ACL.

Flynn has the fact that he’s a proven commodity going for him. Scooter, however, is younger, cheaper, can make all the throws and has the higher upside.

That still makes him the favorite in our book.

Brett Favre Has No Regrets, Except for Those Regrets

Brett Favre Has No Regrets, Except for Those Regrets